In a written statement provided to the Daily Business News on MHProNews, the Manufactured Housing Institute (MHI) and their prior Executive Committee Chairman, Nathan Smith, slammed the new manufactured home communities association.

From the issue shown in the screen capture above, comes the following direct quote:

“MHI was the only national trade association representing manufactured home communities to file a comment letter. “I am so proud of MHI and our state associations in the way they are fighting to end discriminatory zoning,” said community owner and former MHI chair, Nathan Smith. “It doesn’t surprise me that our state EDs were all over it and groups like the National Association of Manufactured Housing Community Owners ignored HUD’s call for comments, failing in their first opportunity to stand up for communities,” per that part of MHI’s statement today.

That’s an argument that MHI and Smith may not have realized cuts both ways.

Can You Spell Self-Contradictory?

What the message fails to say is that Nathan Smith, partner in SSK Communities, also failed to send a comments letter. Can you spell self-contradictory hypocrisy? 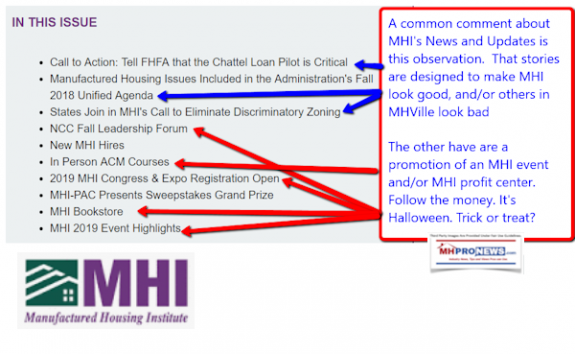 What MHI’s message fails to mention is that the Regulations.gov website has said for some time that ‘astroturfing’ isn’t viewed as a vote.  Numerous messages that are all essentially the same are not more impressive, per the federal regulatory comments site.

What arguably is more important in their message is the fact that MHI felt the need to slam the new communities organization by name.

Keep in mind that MHProNews has reported on, but has not thereby endorsed, the National Association of Manufactured Housing Community Owners (NMHCO) trade group.  What the Daily Business News has done is reveal how NMHCO has called into question MHI’s effectiveness.  That’s an issue that they did arguably with as much respect as one can, while essentially saying that the Arlington, VA based MHI trade group is a wasted time and money.  At least, it is a waste if you want to deter harmful regulations to manufactured housing industry independents.

For more on NMHCO, see the article linked above.

Another question ought to be this. Why is it that it takes pressure from the Manufactured Housing Association for Regulatory Reform (MHARR), trade publisher MHProNews, and/or others to get MHI to do even feign doing its job?

Doesn’t weaponized MHI ‘news’ like the above, demonstrate that they are feeling the heat? “We Provide, You Decide.” (News, analysis, and commentary.)