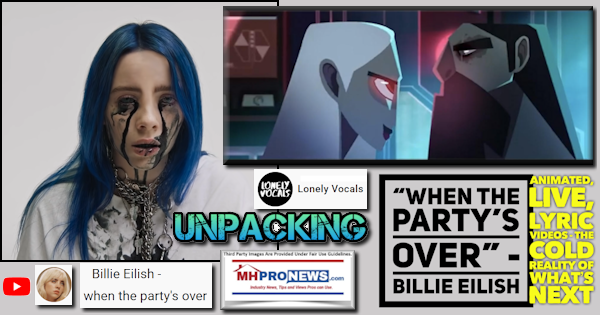 Millions did not get the memo. Millions who think they did missed it too. Performer Billie Eilish may or maybe not agree on precisely “when the party’s over.” But “The Party” unofficially ended for many Americans circa March 2020. Millions who were experiencing the best economy of their lives just a few weeks earlier had their good times ‘party’ abruptly ended that fateful month. Two weeks to flatten the curve resulted in 17 months and counting of various public health and other governmental measures that put millions out of work when their workplaces and/or businesses were ‘temporarily’ or permanently closed due to the declared COVID19 pandemic. But the darker side or the party rolls on for people like Bill Gates, Warren Buffett, Jeff Bezos, Mark Zuckerberg, George Soros, and others. “Don’t you know I’m no good for you?” – quietly sings Eilish in her hit “when the party’s over.”

Those insiders at the top have arguably benefited to the tune of hundreds of billions, as so often seems to occur after an economic or other disruption. “I could lie, say I like it like that, like it like that,” sings Eilish.

Those billionaires and their ilk may come dressed as some white knight. They have the means to dress up what they do, because they are selling something that if they were straight about, not many would buy.  “I’ll only hurt you if you let me,” intones Eilish.

Those billionaire insiders have purportedly manipulated the masses through their corporate, financial, political, media, and big tech connections for far too long. What they promise to give may seem to feel good for a bit, but then leaves others – feeling empty. What was promised has been an illusion – “But nothin’ is better sometimes,” chants Eilish.

But those at the pinnacle of corporate, finance, media, tech, and the political society that they buy are apparently closer to the Prince Of Darkness than some white knight. Eilish croons, “I’ve learned to lose you, can’t afford to, Tore my shirt to stop you bleedin’, But nothin’ ever stops you leavin’, Quiet when I’m comin’ home and I’m on my own…”

The Party’s Over linked below was published on
March 20, 2020. It is still being accessed by numbers of readers,
as it apparently still holds insights. It sets out eye opening facts.

“In war,
truth is the first casualty.”

Why do people lie? So asks Charade character Reggie Lampert: “Why do people have to tell lies?” Peter Joshua “Usually it’s because they want something. They are afraid the truth won’t get it for them.”

The lyrics to Billie Ellis’s song, per LyricFind, are shown below.

when the party’s over

Don’t you know I’m no good for you?
I’ve learned to lose you, can’t afford to
Tore my shirt to stop you bleedin’
But nothin’ ever stops you leavin’

Don’t you know too much already?
I’ll only hurt you if you let me
Call me friend but keep me closer (call me back)
And I’ll call you when the party’s over

This clever animated version of the video inspires thoughts akin to those found in this post.

Until people wake up to the sobering realization that they have been lied to and deceived for years, the illusions, broken hearts, and shattered dreams will only persist.

There ain’t no such thing as a free lunch (TANSTAAFL). Someone always pays. The liars engaged in Deception and Misdirection want to make sure that YOU or anyone other than they will be the ones to suffer and pay.

Every dark seduction is based on a promise or hope for something good that turns out instead to be an illusion. Per Eilish, “Don’t you know too much already?” That dark swill ought to be obviously bad for us, but people have been conditioned to believe thing that thousands of years of faith and reason tell us about deeds that are “no good for you.”

But don’t just let a song tickle you fancy, get lost in aimless thoughts, or make you sympathetically cry in your own beer.

The system has been rigged.

Those who rigged the system are steadily being exposed.

Sometimes they even expose themselves, as one of several types of head fake.

The party is over.

It is not when the party is over. The party has ended and there are dark tears being shed (see video below). Before we lose more of what little is left of our personal liberties, and the hope for a better future, sharing the truth with others is a must. Dig deeper into the longer reports that are linked herein. Then, share this post with these potent lyrics, and image-rich videos.

Because if American falls completely into the hands of those tyrannical billionaires with their political or bureaucratic henchmen, there will be no other nation to come riding in on a white horse to save the U.S. If America falls, then the rest of the world falls too. Who said? Trevor Loudon, a New Zealander who came to America because he knew that this was the ultimate battle ground. Loudon’s not the first or the last who thought so.

To recapture the American Dream, we have to know who deceived, raped, robbed us, had the nerve to tell us if was all for our own good, that they knew better that the Almighty and centuries of experiences that tell us differently.

It’s time to stop the bleeding and the deceiving. As Eilish mournfully intoned, “I could lie, say I like it like that, like it like that.” But deep in our core we know, as she quietly wailed – “Once we’ve both said our goodbyes, Let’s just let it go…” ##