Several dozen manufactured housing industry professionals witnessed first-hand when Rick Robinson – Sr. VP and General Counsel to the Manufactured Housing Institute (MHI) – after his ‘Washington briefing,’ said “Tony, I will not be taking questions from the press.”

Why would Robinson take a question from the Washington Post, but not take one from MHProNews?

Sources tell MHProNews that while MHI attempts to avoid the perception that they are responding to questions from MHProNews, MHARR or others in the industry, they are in fact responding – only without admitting doing so.

This smells of what the Rev. Donald Tye, Jr. generically calls “two-faced,” and “dishonorable” behavior by those working on behalf of big, crony capitalist businesses against the interests of independent businesses – and how that impacts millions who are trapped in rentals and poverty as a result. 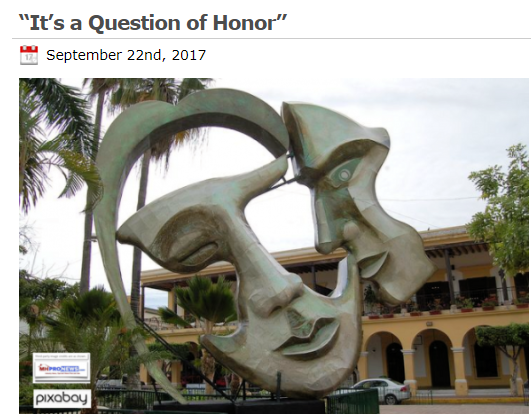 Note, we have not yet asked Rev Tye to comment publicly on MHI and the Buffett/Berkshire Hathaway questions and concerns, but do the principles in the article linked here apply?

Let’s be clear and balanced.  MHI has its defenders.  MHProNews gets off-the-record comments from those who are happy to defend MHI.  But to date, not one of them will debate the actual effectiveness of MHI on behalf of the industry it claims to represent.

In fact, many no longer want to be quoted on-the-record as defending MHI — or specific MHI personalities.

By contrast, there’s been a growing number of voices who have asked or directly accused MHI and/or key companies that dominate the association of:

monopolistic behavior, hypocrisy, racism, deceptive behavior towards the bulk of their own members, routinely failing to achieve what MHI says they want, which it is alleged that if they succeed or not, de facto benefits Berkshire Hathaway connected companies,

We sent the attached message via email as a follow up to Rick Robinson, and MHI’s top staff and some “key” members. We will advise the industry if they will provide a response, or if they will continue to duck the concerns, allegations, and failures by the Arlington, VA based trade organization. 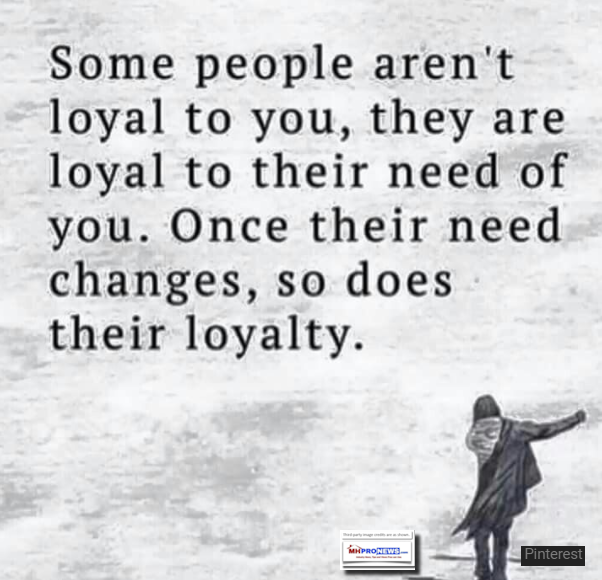 While MHProNews and/or MHLivingNews can directly and indirectly raise issues and concerns, ultimately the individual members of the industry need to either reform or replace MHI as the industry’s “umbrella” trade group.

MHARR may or may not act at their November meeting to expand their membership beyond their current independent HUD Code producer structure.   That trade group has called for years for the post-production sector of the industry to create an organization that will truly represent their interests. 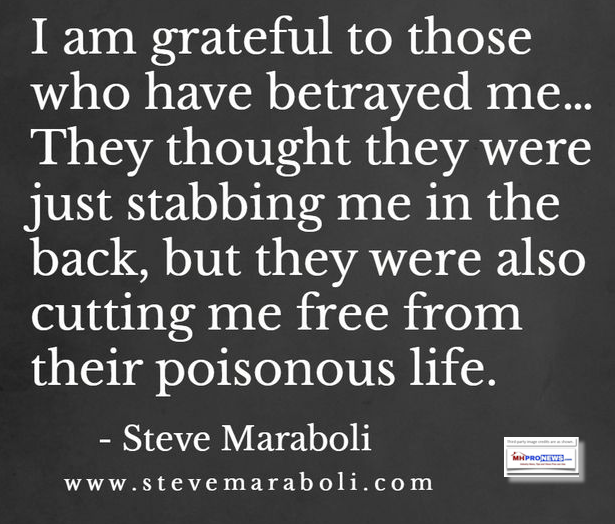 Frank Rolfe, George Allen, Spencer Roane and others in the community sector have said in semi-private and public statements that MHI is failing in several respects.  While those professionals are not all friends, or see all things eye-to-eye, that unity of concern about MHI is noteworthy. 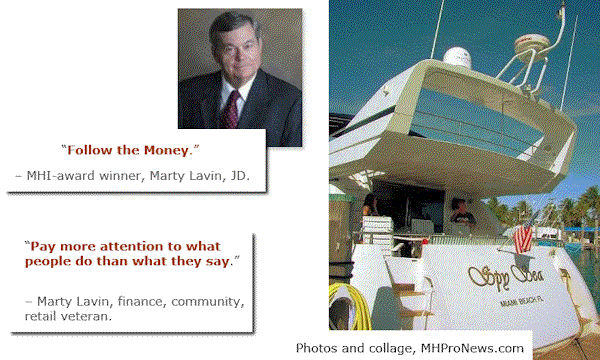 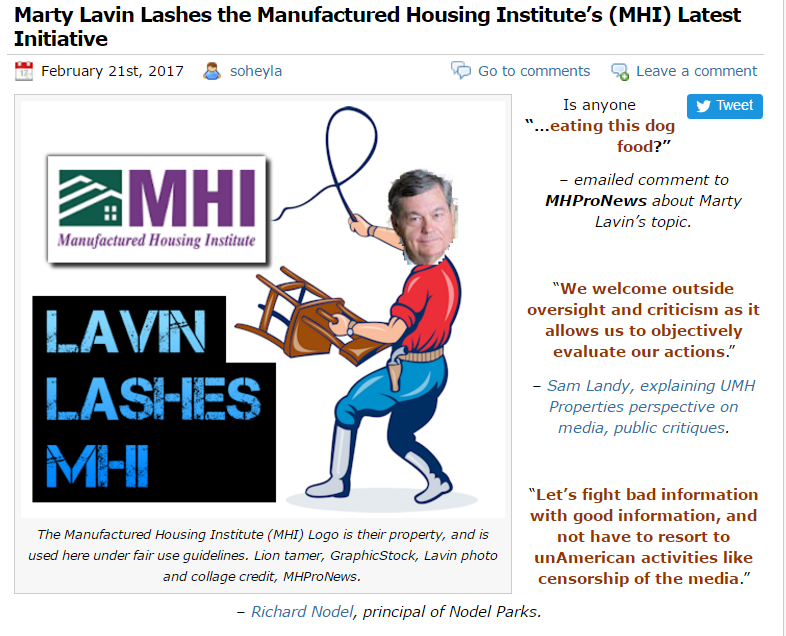 At the same time, they and others have not yet proposed a public solution on how to either reform MHI, or to create an organization that will represent retailers, lenders, communities, and others.

There are many options.

While MHI is ‘ineffective,’ that is harming independent companies.

Who wins, and who loses, because of MHI’s failure to achieve its stated goals? 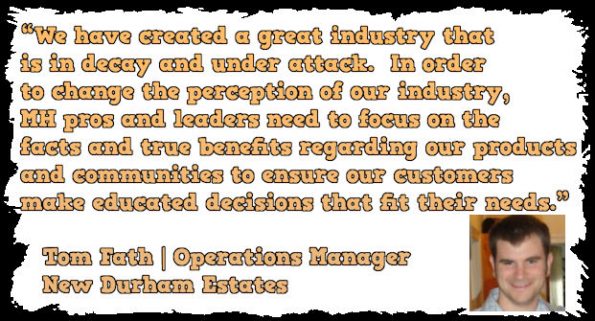 If MHI had a good answer to the industry’s concerns, wouldn’t they make it? 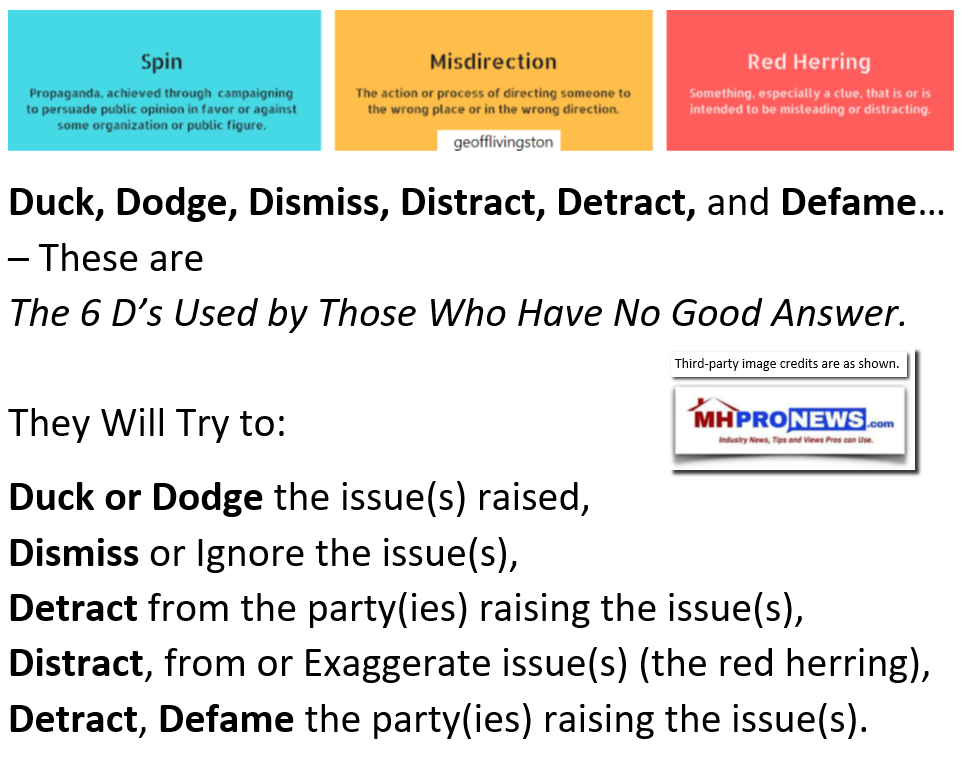 Isn’t it obvious that they have no good answers, and thus will continue their duck, dodge, distract, detract and defame ways? 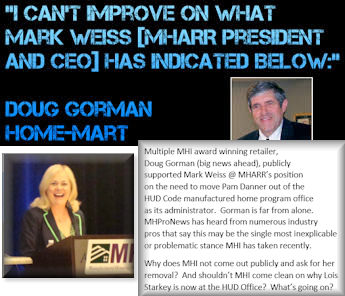 Is it like a long time MHI member told MHProNews –  ‘The big companies have figured out how to get the smaller companies to pay for what they want.’ – is that the reality of MHI?

This writer is willing to debate MHI publicly on such issues.