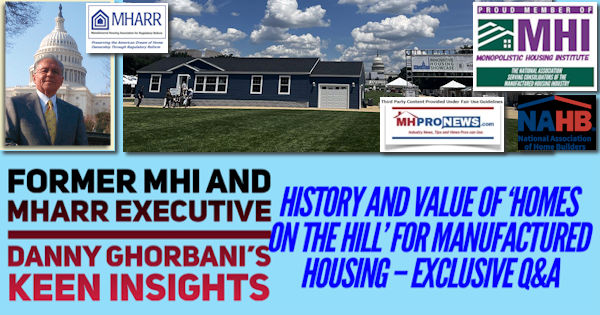 Danny Ghorbani was working for the Manufactured Housing Institute as a vice president for years before he and some industry colleagues launched an independent trade association that eventually became the Manufactured Housing Association for Regulatory Reform (MHARR). Ghorbani led MHARR for years before Mark Weiss took over the helm and Ghorbani moved into an advisory role with the Washington, D.C. based trade group. During the years he worked at MHI, Ghorbani and Skyline teamed up to do the ‘original’ ‘Homes on the Hill’ near the U.S. Capitol and the federal buildings nearby. Unfortunately, many industry professionals are unaware of that history or the motivations and rationale to the original display of manufactured homes in the national capitol. To provide that context, Ghorbani was asked to email comments on the recent National Association of Home Builders and HUD co-sponsored Innovative Housing Showcase on the National Mall in Washington, D.C. His emailed reply to MHProNews is below. The bracketed comments and links below were added by MHProNews to illustrate his points and provide supportive evidence for his remarks. 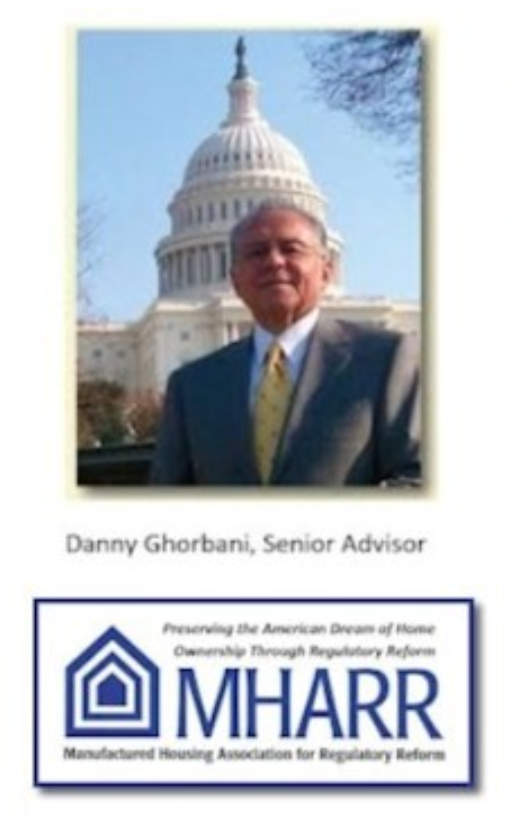 “Please wake me up the first time one of these national officials, and more specifically a HUD Secretary actually takes action to correct a discriminatory and/or exclusionary zoning law against manufactured housing and, in fact, advances our homes that it regulates, certifies and fully controls. Remember, Jack Kemp was the HUD Secretary who correctly identified and coined the phrase NIMBY (Not In My Back Yard) for this problem in a report to then President George H.W. Bush. [POTUS 41-R]. Here we are decades later, and HUD hasn’t done anything of substance to correct the NIMBY problem…even after we gave HUD the additional power and authority with the “Enhanced Preemption” provision of our 2000 Reform Law [i.e.: the Manufactured Housing Improvement Act of 2000].

The bottom line is that when we erected and staged the HOUSE ON THE HILL as our industry’s very first exclusive “village” (i.e., not as a second fiddle to site builders and NAHB) in Washington, D.C. in 1970s, there were very sound and badly needed reasons and purposes for our industry (by then, a comprehensively federally regulated industry) to showcase its products in the nation’s capital. In part, these were to educate the U.S. Congress, government agencies, and other decision-makers about our then-latest homes which were being offered to the public at large. We did that because:

1- The industry had completed its transition from “trailers” to “mobile homes;”

2- The 1974 federal law was in its third year of implementation, and HUD was already moving on the wrong track enforcing it;

3- We wanted to make sure that Congress, government agencies, and all other decision-makers would accord our manufactured homes full parity with all other types of housing in all federally supported, assisted and funded  housing, mortgage and finance programs.

And the evolutionary history of our industry clearly shows that, thanks to the creation of MHARR in 1985, not only many of those purposes were achieved, but, in the process, we also discovered that the 1974 federal law was badly flawed and in dire need of comprehensive reform to address today’s modern, quality, energy efficient, and affordable manufactured homes. That was in conjunction with reform of existing law and new laws needed for manufactured home consumer finance.

The fact of the matter is that none of those badly needed reasons and purpose exists today because Congress has mandated great laws for production, marketing, and consumer financing of our industry’s modern manufactured homes.

In short, Congress has generously done its job for our industry and our consumers…we made sure of that. That said, the only other thing that Congress can and should do is Congressional Oversight Hearings, which the industry (i.e., its so-called post-production representation) is scared to death to ask for, but that is a story for another time.

So, the continuing failure of full and proper implementation of these great laws by our industry has blunted and stymied the growth of manufactured housing.

And while a good dog and pony show is always a welcome event in the nation’s capital, the industry has much bigger fish to fry these days.

Therefore, the industry must keep its collective eye on the big prize, which is first and foremost the full and proper implementation of its existing laws, particularly as they pertain to discriminatory and/or exclusionary zoning laws and consumer finance, all of which we worked and fought so hard to achieve, but continue to languish unused.

As I have said many times before, posturing, public relations, photo-ops, rubbing shoulders, big talks, etc. are cheap and low-hanging fruits that are easy to pick…but what our industry and our consumers desperately need is heavy-lifting, hard work, fighting spirit, tough and aggressive attitude and productive ACTION(S), which, unfortunately, is not happening as of yet because of  the incompetence of those who are entrusted by the hardworking and trusting members of our manufactured home industry to advance them.” ##

For a fuller context, more facts, plus MHProNews analysis, see the report linked above. ##