We either define ourselves, or others will define us, often to our industry’s and homeowners’ detriment.

The optimist doesn’t deny that rain is falling; rather, the optimist recognizes reality, grabs an umbrella and continues forward towards the goal. 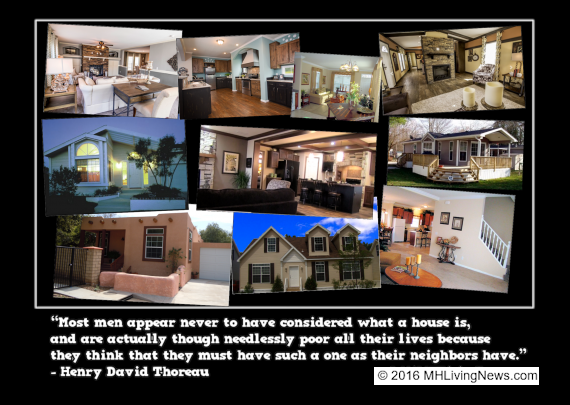 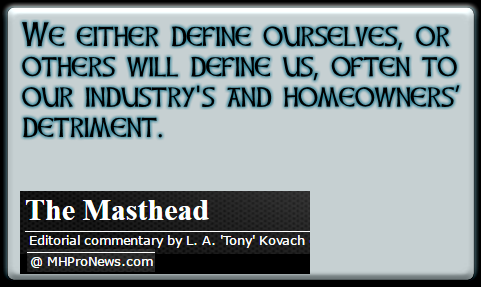 The optimist is navigating reality and is solution oriented, while the pessimist is oh, woe is me, I’m a victim, and the sky is falling oriented.

These are just some of the pithy pensées (French for, “thoughts”), we’ve shared over the years.

Before we push onto our silver-lining topic for today, some programming notes for our upcoming Superior September 2016 issue of MHProNews featured articles and reports.

We had not one, not two, but three different Cup of Coffee with… interviews lined up for September.  It now looks like one will slide into October, another looks like it will be ready for September, but won’t go live on the home page until the week of the Sept 5th.

But in addition to all of the good, meaty things you routinely see featured on MHProNews daily, weekly and monthly, there will be also be reports you won’t find anywhere else in MHVille. So stay tuned, as the first-of-the month is rapidly approaching. Now on to today’s topic. 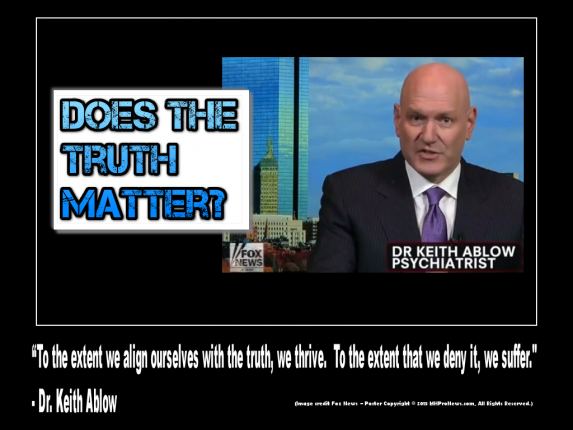 “The Voice of Manufactured Housing” is…

…there have been a number of kind MHPros over the years who at meetings, in private, in public and in published comments have called MHProNews.com and MHLivingNews.com “The Voice of Manufactured Housing.”

Thanks, but that voice works only because the real voice for the industry are pros look you – any and all of us – We collectively are the Industry’s Voice – those who strive daily to Do it Right, Raise the Bar, and Serve the Public and our fellow professionals well.

With that lofty goal in mind, from day one when our first online edition launched in mid-October, 2009 (at the depth of the so-called Great Recession), we’ve always featured multiple pros every month and every issue. 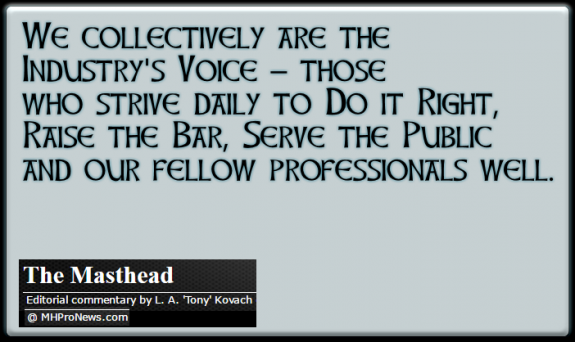 We have always accepted thoughtful commentary from pros of any and all political, economic, faiths, genders, ethnic or other groups. This has never been “all about me” site; rather – in word and deed – it’s always been about inspiring and acting in concert with others.

It’s all about Our Industry, YOUR career, YOUR organization and the tremendous opportunities and potential for ever greater and more profitable success.

For several years, we have sought comments from industry pros on specific as well as general issues.

But more recently, we’ve increased that tempo, asking your peers for comments on issues, which sometimes are off the record, but are often on the record.

These twin platforms are YOUR Voice to the industry and to the public at large. That voice must be projected first to the industry, and then to the nation and beyond.

In a perfect world, as independent trade media, publishers who arenn’t captive to

we are uniquely able to help the industry define and refine itself.

But this can only be done properly by having

and our own writers and independent commentary, acting to bring a variety of voices together.

Years ago, we argued that one side of factory-built housing ought not put-down other sides of factory-crafted home building.  I understand why modular-only builders are tempted to put down HUD Code homes, but it’s a strategic mistake and tactical mistake to do so.

We won’t prove that case today, but will once more observe that Mercedes-Benz doesn’t toss rocks at Chevy’s Cruze.

Entry level (think VOG models of HUD Code MH), mid-level and residential style HUD Code homes and MODs are needed in wide parts of the U.S. The need today is in the millions of new housing units. That spells huge opportunities.

The way the HUD code for manufactured homes is written, you can’t do “HUDs” in urban towers, but you can do modular and prefab high-rises.

The point is, there are unique needs for each kind of factory-building.  We should hang together, and the more we do, the faster we will rise together.

The news stories and commenatary we’ve published by others, like those linked on this page, give you lived examples of how we as an industry can forge intelligent reports that respond to bad or inaccurate local, regional or national news.

To best do that, we will continue to need the inputs of Industry Voices like those of your peers, and/or we need your voice.

If you see negative or inaccurate local news in the mainstream media, please bring it to our attention, and then share whenever possible insights and on-the record comments that you can, help us help you advance the MH Industry.

Naturally, none of what we do happens absent sponsors. If you are one of the thousands who logon here every daily, thank you, but also remember to show your appreciation to our sponsors and experts.

Indeed, many of you already have, as our sponsors have often seen nice spikes in business activity, especially when they are actively engaged in all that we do on MHProNews and MHLivingNews.com. 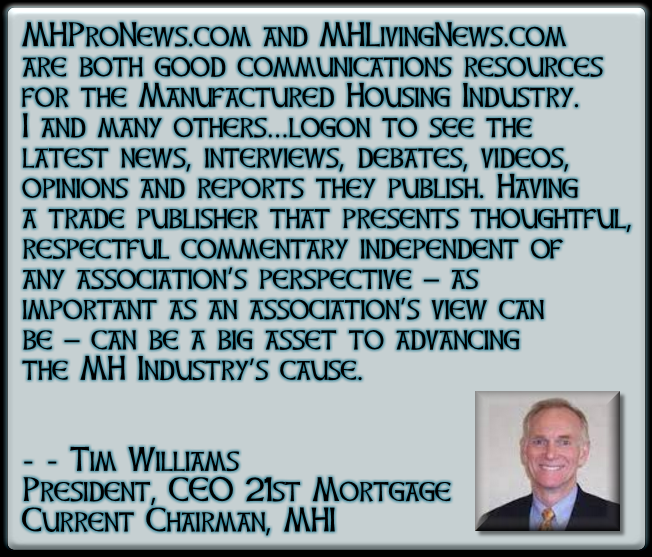 …One, and One for All.  That was the slogan of the Musketeers, and it’s one that I’ve long found inspiring.

Some have and will continue to take the lead in participating, in commentary, in reading or supporting one or both of our trade platforms. More are invited. Not only is “the more, the merrier,” but more support and input will speed our industry’s advancement and acceptance in the broader local, regional and national communities.

No one company, no association is able to do what we’re doing as trade media.  Why?

Because if say GM (or an automotive trade association) owned Car and Driver outright, whatever Car and Driver reported would then be seen as spin or propaganda.

So what Tim Williams stated was 100% right when he said that what we do on MHProNews and MHLivingNews is useful and necessary communications tool, for the advancement of the Manufactured Housing Industry.

When you look carefully at recent reports in the Daily Business News – check out this week’s Sunday Recap here – you’ll see what we mean.

What you’ll see anew in Superior September 2016 are vivid examples of why manufactured housing is essential to our nation. In spite of some 6 years of steady growth, there are still threats to our great industry. There are forces that oppose MH from reaching its potential.

That’s reflected routinely when government – local, state or federal – tips the scales against us; thus we must learn to ever-better express why we are the best answer for the growing affordable housing crisis.

In some urban markets, that solution will be often modular or prefab rather than HUD Code manufactured homes. But as an industry, we need those varied factory-built housing voices to learn how to work ever better, together.

Let me say something politically incorrect to some, but that’s important for us all to get our arms around.

While MHProNews and MHLivingNews have at times ‘taken on’ the misguided attacks by operations like CFED, we must also learn how to work with CFED and those non-profit groups. Frankly, Florida’s fine association is a good example of how that can be done successfully, but there are others.

But when they’re right, we need to work hand-in-hand to advance the MH industry as the solution to affordable quality living for millions who have poor or no good housing options that lead to home ownership.

The Truth Well Told is Powerful

When we showcase the truth, when the truth is well told, we are advancing our cause.

At times, that means calling out bad actors in our industry’s own ranks.  Let me point you to the story, linked above, which those pros that spoke out about – on the record – ought to get a medal for doing so.

When the industry raises up success stories, but also call out bad actors – that’s when we as an industry gain the credibility we need to advance our cause with public officials and the public at large.

Thanks for years of support, encroachment, tips and yes, at times some tough-talk, but always with the aim for the advancement of our great industry.

This industry is the future of housing in America, and the world. Working Together, We Advance to the Day when all forms of factory home-building are respected and accepted.

That’s the mission. That’s the objective we believe in and have worked for from day one. Join us, and share this mission with others. Tallyho! ##