First, the readers digest version, then the details. Last week, the WVHI sent out their newsletter with a column apparently written by their co-president, George Gunnell.  Gunnell is an RVP for Clayton Homes.  That article and others in the same newsletter indicated that MHI wanted Pam Danner ousted from her role at HUD.

That’s not an uncommon position among MHI, MHARR or other industry members, as the WVHI said and suggested themselves in the same newsletter.

So why has that WVHI newsletter erupted into an industry controversy?  Why are some saying, heads will roll because of that?

We’ll examine that and the related, step-by-step, below.

“Apparently,” written by Gunnell because hours after we published our report that spotlighted and quoted the WVHI statements –

Most of those statements were made off the record, which we honor. 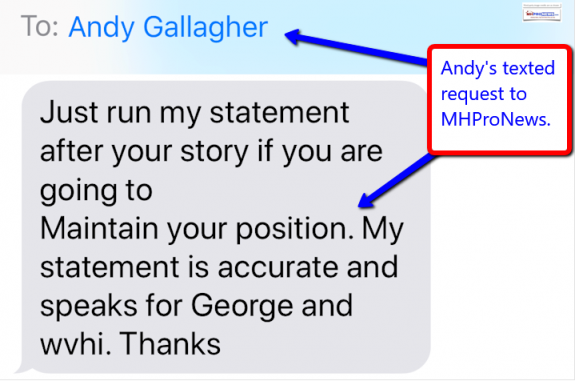 But part of what Gallagher sent – at his texted request makes clear – Andy asked me personally to publish.

Per that statement, as shown below. 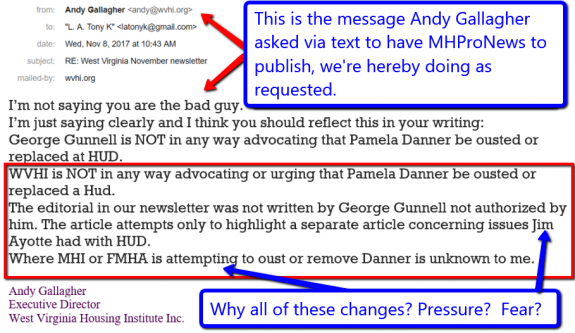 As you see, Andy said, 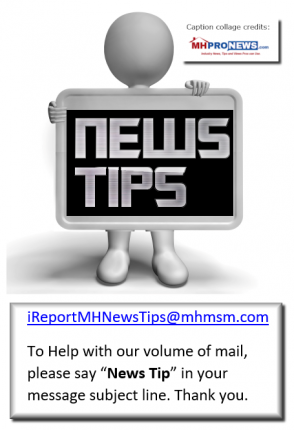 “I’m not saying you [Tony/MHProNews’] are the bad guy.”

“I’m just saying clearly and I think you should reflect this in your writing:”

Happy to, Andy. All of that – and more – we’re hereby doing as requested.  Because we don’t want Gallagher or anyone else to feel unfair pressure.

Further, editorially this writer believes the question needs to be asked: why should award-winning Andy’s job be at risk?

Or for that matter, Clayton’s RVP, George Gunnell’s job?

It should be noted that Gallagher, per sources, worked in journalism in years gone by.

If so, then Gallagher knows the rules of the road, knows English, understands ghost writing, etc.  By the way, ghost writing and pen names are both commonplace in publishing. 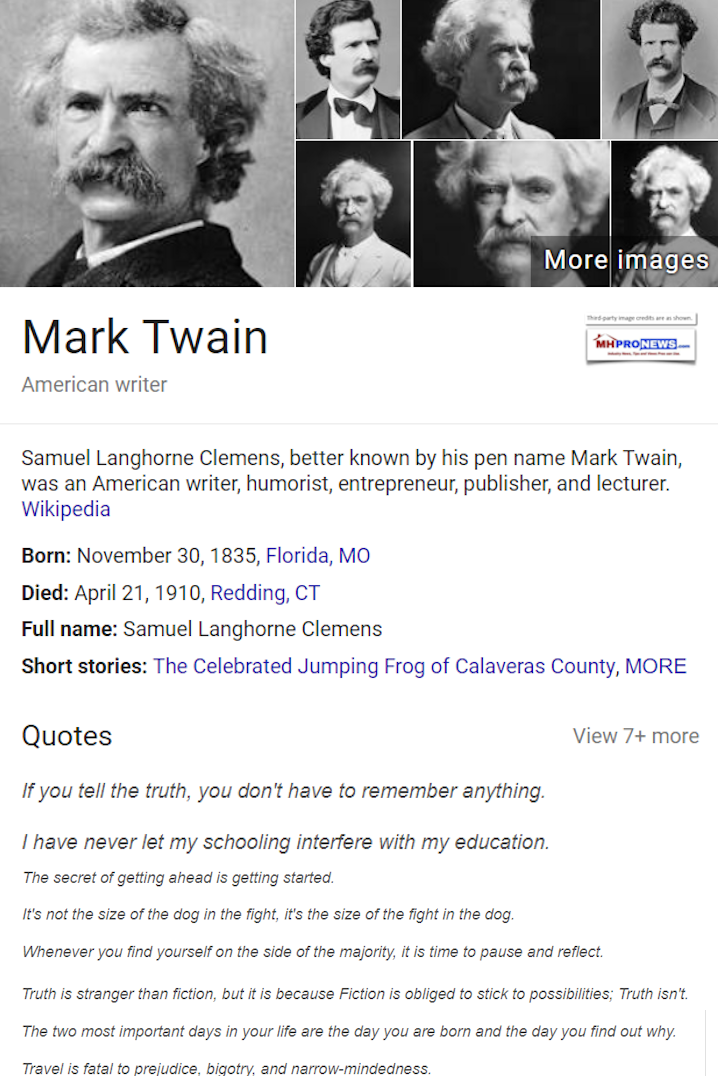 It happens, and should not necessarily be construed as something wrong.  It can be a perfectly fine pratice.

Asking to Pull our Report to the Industry…

A source connected with ties to MHI and the WVHI – perhaps due to some fear and/or pressure – wanted to see the Daily Business News story killed.

As a matter of policy, MHProNews will correct an error, or will clarify a story.

But we don’t pull a news story. Many in mainstream media have a similar policy. That ‘don’t pull a story’ policy exists for several reasons.  That’s a check on us, and on others too.  We strive to make a story accurate before publishing, we quote and cite sources as needed, and we strive to follow the standards that good journalistic practices aspire to meet.

Besides – even if we didn’t have the don’t pull a story policy – wouldn’t they have to ‘pull’ the stories in the WVHI newsletter?  How do you pull something – namely, the WVHI newsletter – that’s already been emailed out to dozens of professionals?

MHProNews policy…while we do some things differently than AP Stylebook suggests (like showing quotes in dark brown text, we’re close on the ideals for a trade publisher).  We’ll also cop a plea to periodic typos. But by trying to get the facts and sources accurately reflected, we’ve built a reputation that makes us the most read – from operations large, medium to mom-and-pop – in the entire manufactured home industry.

Thousands come daily. Readers routinely sign up for our emailed news updates, at this link here.

In short, while not everyone likes every article, quote or comment, we’re #1 by a country mile in this industry’s trade media.

We invite other points of view.  When we disagree or disagree with MHI, we routinely invite them to comment, and/or quote from their own published statements.  We say allegation when that term applies, etc., etc.  That’s fair and balanced. 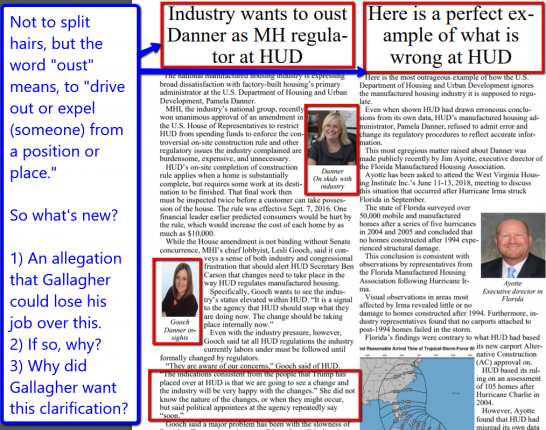 ‘If You Won’t Kill It, Please Re-Write it’

Then, a source asked the Masthead’s writer (me, as MHProNews’ publisher) to re-write the story.

At that point, I personally reviewed all that we knew directly from:

We also looked at MHARR’s consistent position again, summarized in the over 2 dozen reasons why Pam Danner needed to be removed from her current role.

Setting aside who authored Gunnell’s column, the bottom-line is this.

What WVHI published was consistent with the thrust of what we quoted on the Daily Business News and heard from other sources in our MHProNews report, linked above and also linked here.

So why doesn’t MHI just behave in a transparent way?  Instead of trying to get others to change something, why don’t they just speak for themselves?

Why are they making it so difficult for their own members to know what the Arlington, VA based trade association REALLY believes regarding Danner?

MHI has officially ducked for months on the question of their supporting Pam Danner’s removal as the administrator of the Office of Manufactured Housing at HUD.

Publicly in Deadwood, SD – in front of dozens of industry professionals – MHI General Counsel and Senior Vice President, Rick Robinson ducked questions on the Danner issue.  Ditto Preserving Access, and other issues relating to the association’s positions and performance. 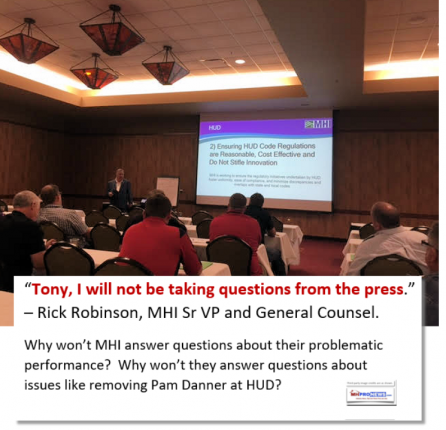 There’s more that could be said, but we’ll hold it for now, and simply ask.

MHI – can you be transparent on this Pam Danner issue?  Can you and those who pull the strings please not try to intimidate Andy Gallagher, or anyone else in the industry?

Where’s that same level of transparency at MHI?  Why are members and the industry being asked to guess whatever it is that MHI claims they want on Pam Danner?

Time will tell anyway. But in the meantime, consider the wisdom of behaving based upon principles – vs. posturing or evasion?

Or consider what Marty Lavin said, does it apply here? 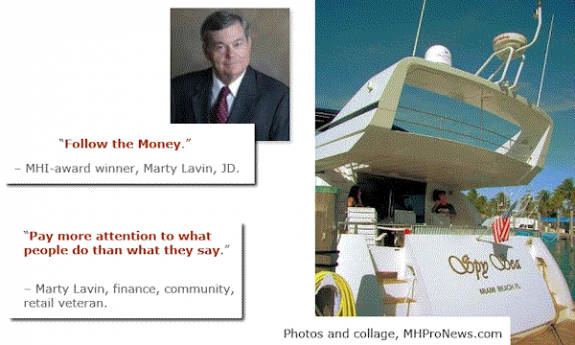 Kovach is the award-winning co-founder and managing member of LifeStyle Factory Homes, LLC, the parent company to MHProNews.com, MHLivingNews.com, and the affiliated business development, consulting, and industry-expert services.