Manufactured housing trade show season begins in only a few weeks. First at Louisville, then about 2 months later at Tunica, independent producers of HUD Code manufactured homes, state coded modular housing, ANSI code RV ‘Park Model,’ and tiny houses are among the types of factory-built housing products that are routinely on display.

In addition, there are dozens of exhibition booths, with products, services, and associations being represented.

The formal show dates are as follows:

These association-connected industry-only trade events are an important part of the industry’s business model for numerous operations.  Millions of dollars in business is done every year at these venues. That’s good.

There are several controversial aspects to these events in recent years, some of which are problematic, missed opportunities, or potentially risky – and that’s arguably bad.

For example, informed sources with deep ties to Show Ways Unlimited, the contracted event company, have told the Daily Business News on MHProNews that Clayton Homes has purportedly attempted to undermine the Tunica Show.

An award winner with connections to the association that runs the Tunica Show told MHProNews recently that, “I have consistently said over this last decade that SOME in our industry focus on an entirely different goal every morning: “What can I do today to make my competition go away?” – vs. merely trying to grow one’s sales, profits, CSI, etc.  It was a reference to Clayton Homes, 21st Mortgage, Vanderbilt Mortgage and Finance, Shaw, and other brands operating in the professional side of the manufactured housing industry – MHVille.

Furthermore, show sources remind MHProNews that Clayton Homes only entered the Louisville Show initially as a “defensive” move, which they naturally tried to use to grow the Berkshire Hathaway “moat.”

It was largely independents – not Clayton – that brought the Louisville Show back.  That was accomplished working in conjunction with MHProNews to make the event a success. MHProNews drew praise from show management and association leaders alike, as the example further below reflects.  As one source said, the only difference between the declining years of manufactured housing’s Louisville Show and the successful turn-around of the same Louisville Show was the promotional work of MHProNews.  While the industry was in decline, that was essential.

Now that the industry is modestly growing, running a decent show is arguably easier.

A source at Show Ways also accused “the Claytons” of sabotaging the Carolina trade show, which has since been canceled. They are concerned that Tunica could go the same way.

MHVillage – a high-profile member-supporter of MHI – have been given a leadership role at these events, in “educational,” and other matters.  Where has MHI leadership led the industry?

The industry has quietly spoken about MHVillage’s interestingly named, MH Insider.  Has there been anything but praise from MH Insider toward MHI or Clayton?

The industry’s members have left scores of copies of that glossy, slick-publication unread, on the racks. See that photo, taken on the last day of the show, further below.

Every Year, the Same Questions from Exhibitors

Factories bear the brunt of the cost for putting on a trade show. Booth exhibitors pay to display too.

Those exhibitors have asked MHProNews’ publisher – L. A. ‘Tony’ Kovach – for years, ‘why aren’t these trade shows opened up to the public?’

At the Kentucky Expo Center (KEC), RV and boat shows are among the events that have “public days” have been done for years. When RV sales soared past manufactured housing in the last 2 decades, one must ask, why aren’t these costly MH Industry events also extended for a few more days, like some RV events have done?

The old Bartle Hall MH Show in Kansas City had public days for manufactured housing.  More recently, so did the Tulsa Show.  Thousands of locals came to tour manufactured homes on those public days.  That can only be a positive for the industry. The Ohio association had a public show too. 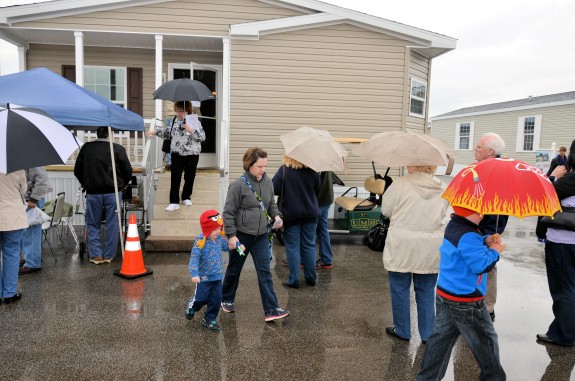 According to former MHI Vice President Danny Ghorbani, the industry had two national shows up until the mid-1980s.  At Louisville, per Ghorbani – who was in charge of the event circa 1976 to 1985 – after the completion of industry days, manufacturers turned over the displayed models homes to their retailers.  Those public days were successful for the industry.

Public days also attracted positive regional and national media.   So, while there was some added costs, there was a serious, positive payoff.

Sources also say there were more international visitors to the event in those days too.  The Louisville event was far bigger, as the graphic further below suggests.

After Ghorbani left MHI to help form what is now MHARR, the Louisville show became a regional show, operated by 5 state associations, that contracted out show management.

It Was Successfully Done Before, Why Not Today?

Show Ways Unlimited – who operate the two trade shows now – has given their formal reasons for why they don’t do public days. But privately, it is hard for them – or anyone else – to argue that there are good reasons to do public days at Tunica and Louisville.

In hindsight, the question is arising — is that lack of public days one more ploy by MHI backed Clayton, et al?  Even if not, isn’t it an obvious oversight?

Furthermore, Dennis Hill is going to step aside at some point in time. When that happens, what will happen to the independents and non-Berkshire Hathaway exhibitors – especially if pro-MHI, pro-Clayton forces – like MHVillage – take over the show completely?

These are real issues that the manufactured housing industry’s independents need to address.

In the meantime, the parent company for MHProNews – LifeStyle Factory Homes, LLC – could provide the industry’s independents with several ways to turn the tables on MHI and the big boys like Clayton, 21st, Vanderbilt, Shaw, MHVillage, and others closely aligned with them.  Those MHI insider forces arguably have manipulated matters to favor the ‘insiders’ at various events.

For example, the MHVillage’s Louisville and Tunica websites have purportedly been arranged, to spotlight ‘MHI Insiders’ over independents.  For example, notice how they conveniently have the drone fly over the MHI booth, and the 21st Mortgage booth too?

The same is true of the MHVillage (MHV) led ‘education.’  It must be noted – not as a put-down, but as an evidence based reality – that Darren Krolewski has admitted publicly in front of dozens of industry professionals at Tunica last year that he can’t explain why so few visitors to their website actually become buyers.

Using their own data, just a small fraction of a single percent of MHV surfers become manufactured home buyers, and most of those buyers turn to a pre-owned home, not a new manufactured home.

The industry doesn’t need more glossy happy talk. It needs reality, which includes proven ways to grow the industry to its true potential, which during an affordable housing crisis should be 5 to 10 times (+/-) current shipment levels.

The issues noted herein or elsewhere could be flipped, by creating synergies with LifeStyle Factory Homes owned trade show websites in conjunction with select independents.

Given the large investments that companies make to display at Louisville and Tunica, some additional marketing support only makes sense to help insure a more successful event for a given company.

These 2 trade events could also be used as opportunities to better establish new post-production associations to compete with MHI and the ‘big boys’ allied with the Berkshire brands.

The original Louisville and Tunica show websites are now the web properties of LifeStyle Factory Homes, and can be used to promote SPECIFIC companies – like your company – before, during, and after a given event.   That can be done with budgets starting from $500 to $15,000 (+/-), the later of which can include videos and other longer-term promotional items.

As the promoters of MHIdea have noted, ‘if the industry keeps doing the same things, the same ways, with the same people, then those companies will keep getting the same results.’

The latest MHI email – if accurate – no longer projects an increase of shipments to 100,000 units for 2018. That’s a warning sign.  As Jenny Hodge at MHI said in their emailed message today:

“The seasonally adjusted annual rate (SAAR) of [new HUD Code manufactured home] shipments was 92,236 in October 2018, down 2.8% from the adjusted rate of 94,877 in September 2018. The SAAR corrects for normal seasonal variations and projects annual shipments based on the current monthly total.” Are these the people the industry’s independents need to be following?

More details will be provided in the days ahead as plans and potential synergies emerge.  The return of more ‘dealer days’ could be a win-win-win. Those kinds of proven concepts need to be revived, and could be in 2020. But in 2019, more successful promotion of specific companies could set that stage.

But first things first.  It is wise to start in to explore opportunities for individual companies at Louisville or Tunica in 2019 to get their results up.  To explore 2019 and 2020, you can click to email tony@mhmsm.com or call 863-213-4090.

It was MHProNews – in conjunction with others – helped lead-the-charge for the comeback of the Louisville Show, and kept the Tunica Show from sliding backwards when Clayton pulled much of their inventory out. We’re planning to be a part of not just spotlighting problems other trade media avoid mentioning, but of providing profitable solutions to industry independents too. That’s MH “Industry News, Tips, and Views that Pros Can Use,” © where “We Provide, You Decide.” © ## (News, analysis, and commentary.)

NOTICE: Readers have periodically reported that they are getting a better experience when reading MHProNews on the Microsoft Edge, or Apple Safari browser than with Google’s Chrome browser. Chrome reportedly manipulates the content of a page more than the other two browsers.

2) To provide a News Tips and/or Commentary, click the link to the left. Please note if your comments are on-or-off the record, thank you.

Related Reports: Click the Boxes Below to Read More...

From Entry Level to Elegant – Inside Look at the Louisville Manufactured Housing Show – manufacturedhomelivingnews.com

Given its 50+ year history, the Louisville Manufactured Housing Show has been called the ‘grand daddy’ of all the trade shows that serve manufactured home business owners, managers and professionals. For years, there has been a debate on the show being kept exclusively as a professional event (meaning, closed to to public) or opening it up on the weekend following the trade days to include ‘public days.’