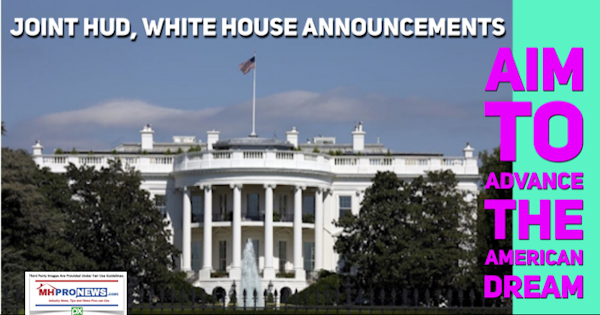 Press releases from both the Department of Housing and Urban Development (HUD) and the White House pressroom to the Daily Business News on MHProNews could be summed up with this goal in mind.

There is a need to revive, expand, and protect the American Dream for all.

President Donald J. Trump signed a new EO – Executive Order – based upon authority from the 2017 Tax Cut and Jobs Act of 2017. It is meant to foster development of the opportunity zones that MHProNews has previously reported on, for example, in the two articles linked below.

Each article can be accessed by clicking on the linked box, later, for more details.  Because there are already – per reports – some in factory-built housing that are preparing to act on these opportunities.

Opportunity Zones Law in Place, Poised to Benefit Some 50,000,000 Americans

Given a pending fuller implementation of the Manufactured Housing Improvement Act (MHIA) of 2000 and/or under Affirmatively Furthering Fair Housing (AFFH), these Opportunity Zones could be welcome news for HUD Code manufactured home and other factory- builders.

Affirmatively Furthering Fair Housing, a Novel Yet Proven Solution to the Affordable Housing Crisis That Will Create Opportunities, Based Upon Existing Laws – manufacturedhomelivingnews.com

Affordable quality housing is one of the most critical issues of our time. So too is affordable home ownership, which should be the ideal goal over rental housing. A challenge is zoning and land use, which is highly politicized, and thus is often misunderstood. What follows is adapted from the comments letter addressed as shown below.

The creation of more jobs, and less government dependency clearly are good for people, budgets, and those who want to serve the millions who have been trapped in programs and economic conditions that arguably keeps millions poorer.

The HUD press release will be first, followed by a complementary but broader media statement from the White House afterwards.

Please note that by providing these federal releases in toto, it gives industry readers an opportunity to see the take – in this case – from the White House and HUD, unfiltered by other media.  MHProNews tees up the factory-built home industry context, you get to see for yourself what these branches of your government have to say.

The Council’s 13 Federal member agencies will engage with governments at all levels on ways to more effectively use taxpayer dollars to revitalize low-income communities. The Council will improve revitalization efforts by streamlining, coordinating, and targeting existing Federal programs to Opportunity Zones, economically distressed communities where new investments may be eligible for preferential tax treatment.

Additionally, the Council will consider legislative proposals and undertake regulatory reform to remove barriers to revitalization efforts and present the President with options to encourage capital investment in economically distressed communities.

“These are still early days for the work of the Council and Opportunity Zones, but the groundwork has been laid,” Secretary Carson said. “The seeds the President has planted are growing and the promise they hold will improve places long forgotten, and the lives of those who call those places home.”

Opportunity Zones are a key part of the tax cuts signed into law by President Donald J. Trump last December. Today, they got another huge boost.

“For decades, job growth and investment have been concentrated in a few major metropolitan areas,” the President said after signing an executive order to create the White House Opportunity and Revitalization Council. “Some cities have thrived, while others have suffered chronic economic and social hardship. With Opportunity Zones, we are drawing investment into neglected and underserved communities of America.”

The purpose of Opportunity Zones is to lift up communities that have been neglected by Washington and left behind for far too long. The typical family income in these areas is 37 percent below their state’s median level. The average poverty rate is 32 percent—almost double the national average. Nearly 35 million Americans live in these communities. Now, help is on the way.

Here’s how it works: Tax relief is offered in exchange for long-term investments in the low-income communities that need it most. These poorer areas begin to see more job creation and lasting growth. This private investment fuels human potential in these communities, whereas government spending programs too often extinguish it.

The upshot: All Americans, regardless of zip code, should have access to the American Dream. With Opportunity Zones, we get closer to that reality.

President Trump is lifting up the communities that Washington forgot.

‘We need to know who is coming in and going out’

Yesterday’s tragic terror attack at a Christmas market in Strasbourg, France, reminds us that national security is nothing without border security.

Secretary of State Mike Pompeo explained the stakes. “This is an enormous challenge. We have this problem in the United States as well,” he said. “Lots of folks that we’re watching, we think are at risk, we try to monitor. But the numbers are so big. It’s why, frankly, border security matters.”

“We need to know who is coming in and out of our country.”

Controlling the border is a matter of public safety—one that includes many threats beyond terrorism. From October 2017 through this July, U.S. Border Patrol seized 6,423 pounds of cocaine, 532 pounds of heroin, 439,531 pounds of marijuana, 10,382 pounds of methamphetamine, and 332 pounds of fentanyl from Border Patrol checkpoints.

It’s time to make a deal. There’s nothing partisan about protecting our borders to encourage legal immigration.

Throwback: When Sen. Chuck Schumer believed in securing our border

For years, Democrats have acknowledged the need for border security—even voting for it in the past. Why won’t they come to the table in 2018?

That’s this morning’s “News Through the Lens of Manufactured Homes, and Factory-Built Housing,” © where “We Provide, You Decide.” © ## (News, analysis, and commentary.)

NOTICE: Readers have periodically reported that they are getting a better experience when reading MHProNews on the Microsoft Edge, or Apple Safari browser than with Google’s Chrome browser. Chrome reportedly manipulates the content of a page more than the other two browsers.

2) To provide a News Tips and/or Commentary, click the link to the left. Please note if your comments are on-or-off the record, thank you.

Related Reports: Click the Boxes Below to Read More...