CHICAGO IL, JULY 1, 2010 – Hurricane season is upon us and analysts are predicting a particularly active season. Hurricanes and tornadoes spawn not only damaging winds, but also a rash of sensational reports damaging to the image of manufactured housing. These reports often create fears among consumers. But is that fair to scare prospective customers for today’s factory built home industry? Study reports suggest the answer to that is no.

This year hurricanes named Alex, Bonnie and Colin could bring injury and damage to homeowners along the eastern seaboard and in Gulf States. With Hurricane Alex already making its way into Texas, we’re reminded that Philip J. Klotzbach’s forecast team at Colorado State University predicted on June 2 that the 2010 season will bring 18 named storms, 10 hurricanes, and five major hurricanes.

The modern manufactured home in the background was built to the new Wind Zone 3 standards adopted for HUD Code Manufactured Homes in 1994. This photo was taken from detailed studies done in the aftermath of the 4 hurricanes that hit Florida in 2004.

As this picture dramatically demonstrates, the older home in the foreground didn’t survive, but the modern manufactured home right next door survived relatively undamaged.

Ironically, most of the names that will be used in the 2010 hurricane season are the same as those used in the active season of 2004 when Charley, Frances, Ivan and Jeanne – these names retired – made landfall in Florida. A closer look at how manufactured homes faired in that 2004 hurricane season makes good sense. “Tragically, an unprecedented hurricane season in 2004 saw four major hurricanes with sustained winds ranging from 105-145mph at landfall, impact 60 of 67 counties in Florida within a span of six weeks (DHSMV, 2004).” That season left more than 3,000 people dead, including 152 in the U.S., and caused more than $42 billion in property damage.

According to the Insurance Information Institute; Florida accounted for 22 percent of all U.S. insured catastrophe losses from 1980-2006, losses which equate to $59.0 billion. Yet the experience of the 2004 hurricane season showed as never before that subject to more stringent codes, newer manufactured homes can weather the storm.

The photo above is of a pre-HUD Code mobile home, destroyed in a Florida hurricane in 2004. As American Integrity Insurance Company President Bob Ritchie explained, conventional residential and commercial construction also suffered devastating losses during that same hurricane season. Photo from the study performed by K.R. Grosskopf, Ph.D.

The study also compared the methods, materials, waste generation and energy use of manufactured housing to site-built homes in 110-mph wind speed zones. It should be noted that those Wind Zone III standards put in place in 1994 readily handled the sustained winds recorded by the hurricanes of 2004. The study also found that manufactured housing has less waste, is energy efficient and more cost effective.

Some insurers have taken note.

Ritchie told MHMSM.com that for Florida the homes ten years and newer rival or are in some cases superior to site-built. That fact, he says “can make people’s head turn.”

Best prepared are homes built after the adoption of the federal HUD Code manufacturing standards in June 15, 1976. Wind standards were adopted in 1994 and installation standards imposed by the Sunshine State in 1999.

The study noted the requirements in 1994 that came as a result of the destruction caused by Hurricane Andrew in 1992.

“It’s all for naught if you build the (homes) right but don’t install them correctly.” Ritchie says. “In Florida you take (manufactured) homes that are ’94 and ’99 and newer and they are superior. That was proven by Hurricane Charley in 2004 where you had newer manufactured homes still standing next to a site-built home that was demolished.”

It is pre-HUD Code mobile homes that: “…are more vulnerable to wind-driven losses, so that cost per thousand for that needed coverage is much more.” Ritchie stated. However, the facts are different for modern manufactured homes, where the issue is loss “severity times frequency. That component is typically lower than site-built.”

To rephrase this, pre-HUD Code mobile home losses are higher, and yet manufactured housing losses are lower. Modern manufactured homes performed as well or better as conventional construction in the hurricanes that hit Florida in 2004. But how often does that fact get reported by the mainstream media?

Graphic from the study done by K.R. Grosskopf, Ph.D.

The graphic above demonstrates the negative impact the media can have by misrepresenting the facts, as documented by the study done by K.R. Grosskopf, Ph.D. That negative impact hurts an industry that offers good jobs for Americans as well offers or provides safe, appealing and affordable homes for millions.

“When the mainstream media, public officials or others incorrectly lump modern manufactured housing in with older pre-HUD Code mobile homes, it does an injustice to everyone. It is like comparing a new iPhone to a 50 year old dial phone.” stated L. A. ‘Tony’ Kovach, manufactured housing industry consultant and publisher of the Manufactured Home Marketing Sales Management trade journal.

“I recall a conversation with an Oklahoma City weatherman, back in the 1980s.” Kovach said, “Why do you give this type of portrayal of manufactured housing when it comes to wind storms? Why don’t you use the proper term of manufactured home vs. mobile home? His answer was, ‘We are essentially lobbying for better standards.’ What he didn’t want to realize is that those standards already existed when the HUD Code went into effect on June 15, 1976! Those standards and the updates to the HUD Code that have followed since then just keep making our industry’s homes perform better and better.”

According to the study done by K.R. Grosskopf, Ph.D:

“Manufactured housing has become a staple in the US affordable housing market in spite of a prevailing public opinion that such housing is unsafe. However, University of Florida research shows units constructed after 1994 US code changes survived an unprecedented 2004 hurricane season with little damage. Produced in one-fifth the time and at half the cost of site-built homes, manufactured housing assembled in a factory environment uses fewer materials, generates less waste, and fosters greater worker productivity than comparable site-built construction.”

“The facts demonstrate that modern manufactured homes are stronger, smarter, safer stylish and provide major savings. That is the message that the policy makers, the media and the home buying public needs to grasp. As an industry, we have to do a better job of communicating those facts! You cook, clean, eat, live and love the same in a factory built home as any conventional house, but you can live better because you live for less.” Kovach said. 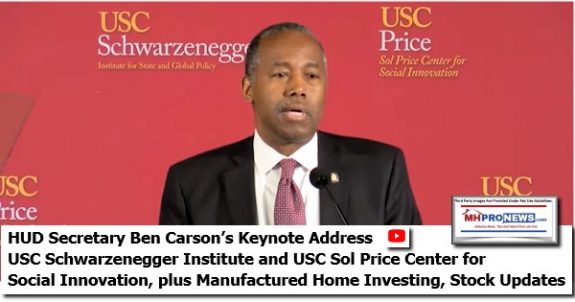