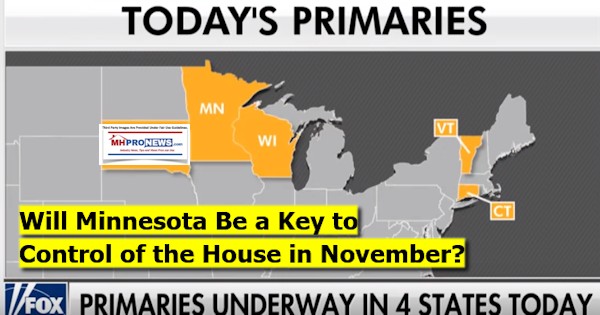 Barring some unforeseen political earthquake, the smart money has the GOP holding the Senate in November’s midterms.

So, the focus for most pundits is on the House of Representatives.

The White House has made it clear that they think they can get a red wave in November, due in part to increased economic improvements.  Some believe that the immigration issue cuts the Trump Administration’s way among the electorate.

In an evening message to the Daily Business News, among the points that the Oval Office is touting is the record high small business optimism.  The White House pressroom also spotlighted a new column by Charlie Kirk in the Hill “that President Trump’s trade policies could level the playing field in a historic way. “President Trump has the potential to end up as the most free-market president of our lifetime.”

Democrats have been saying for months that it is a blue wave coming. The historic pattern is for the party in power to lose seats at the midterm.

Tonight’s snapshot will cover both sides of the left-right media divide.

Readers must be mindful of the sources, which is why the left-right media divide chart further below is useful.

The Manufactured Housing Association for Regulatory Reform (MHARR) does not take a position on political races.  That said, they are on record with this view of the Trump Administration.

Word from MHI members is that they are talking about the GOP loss of the House. While they took no official position in the 2016 presidential election, they predicted the loss of the House and Senate to the Democrats, and had two pro-Clinton speakers on their stage in the days just before the election.

The midterms matter. Buckle up.  That’s “News through the lens of manufactured homes, and factory built housing,” © where “We Provide, You Decide.” © ##  (News, analysis and commentary.)