If you haven’t noticed all of the buzz around the Federal Reserve’s expected rate move, then maybe you’ve been on vacation.

One might sympathize with former Texas Congressman and multiple time presidential candidate, Ron Paul and wonder why the Fed has been given so much power over the U.S. economy?

That’s not the topic for tonight, but instead we’ll look at the facts that flowed from the Fed’s announcements and related economic analysis.  It’s all useful data for savvy MHPros and investors.

Besides related facts and commentary, two different videos, one from either side of the left-right media divide.

Let’s briefly pose one of those politically incorrect, but incredibly important questions before diving into the Fed report tonight.  Where in the Constitution do you see the Federal Reserve?  How is it that the Congress ceded its power to regulate the currency to a semi-independent group over a century ago?

It’s not just Ron Paul who raises that kind of question, but once more that’s not our focus tonight.

The summary could be this: the Fed’s data points indicate continued economic growth in the Trump Administration era. The stats from CNBC, and the videos from them and Fox Business.

·        Central bankers, led by Jerome Powell in his first meeting as chairman, approved the widely expected quarter-point hike that puts the new benchmark funds rate at a target of 1.5 percent to 1.75 percent. It was the sixth rate hike since the policymaking Federal Open Market Committee began raising rates off near-zero in December 2015.

·        The Federal Reserve raises rates for the sixth time since the policymaking Federal Open Market Committee began raising rates off near-zero in December 2015.

·        “The economic outlook has strengthened in recent months,” the committee says in its post-meeting statement.

·        Interest rates are going up again, thanks to a well-telegraphed Federal Reserve move Wednesday.

·        The funds rate is closely tied to consumer interest rates, which generally rise as soon as the Fed moves.

·        Along with the increase came another upgrade in the Fed’s economic forecast, and a hint that the path of rate hikes could be more aggressive. The market currently expects three hikes for 2018, and that remained the baseline forecast, but at least one more increase was added in the following two years.

·        The pace of growth is critical to how the Fed will proceed on monetary policy.

·        According to the summary of economic projections that the FOMC releases each quarter, three rate hikes is still the baseline. However, had one more member indicated a higher funds rate, the forecast likely would have gone to four.

·        Wall Street economists increasingly have been predicting a fourth move in 2018, and the fed funds futures market was indicating a 38 percent chance of it just before the committee statement was released.

·        The decision to increase the funds rate came unanimously even though some members have questioned why the Fed is moving absent more inflationary pressures.

·        The committee noted that household spending and business fixed investment both “have moderated from their strong fourth-quarter readings.”

·        Inflation expectations, on which the market has been laser-focused lately, changed little. The 2018 forecast remains just 1.9 percent for both core and headline inflation — core excludes food and energy prices. For 2019, the forecast for core personal consumption expenditures edged higher to 2.1 percent from 2 percent, while headline remained at 2 percent. The committee nudged the 2020 level up from 2 percent to 2.1 percent for both core and headline.

·        The benign inflation expectations are particularly remarkable considering that Fed officials now see unemployment running even lower than before. Currently at 4.1 percent, officials now see the rate for 2018 at 3.8 percent, down from the 3.9 percent December forecast, and 2019 falling all the way to 3.6 percent from the original 3.9 percent outlook. The 2020 forecast also fell, from 4 percent to 3.6 percent.

·        Fed officials generally believe in the Phillips Curve, which indicates that falling unemployment will act as a push for inflation. That hasn’t been the case throughout the recovery, as the Fed continues to lag its 2 percent inflation target.

·        Markets reacted strongly to a brief inflation scare in early February. Average hourly earnings rose to a recovery-high 2.9 percent for January, but moderated to 2.6 percent in February. The consumer price index also jumped in January but rose in line with expectations in February.

·        The Fed’s preferred personal consumption expenditures index is currently running at about 1.7 percent.

·        The so-called dot plot, which indicates individual members’ rate expectations, took a hawkish tilt. While a three-hike policy remains the baseline for 2018, the committee pushed 2019 from 2½ to three increases and 2020 from 1½ to two. The funds rate for 2020 is now expected to be 3.4 percent from the initial 3.1 percent, though the longer-run forecast rose just a bit, from 2.8 percent to 2.9 percent. 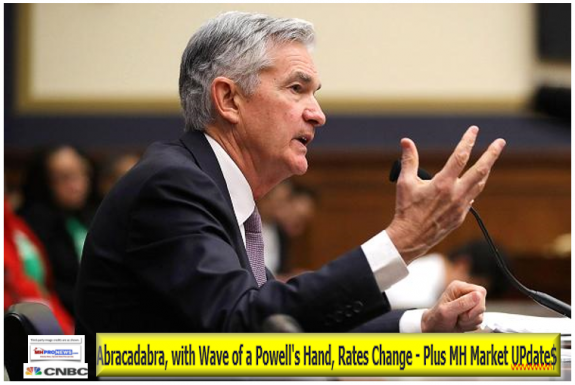 Your link to a recent round of industry praise for our coverage, is found here.