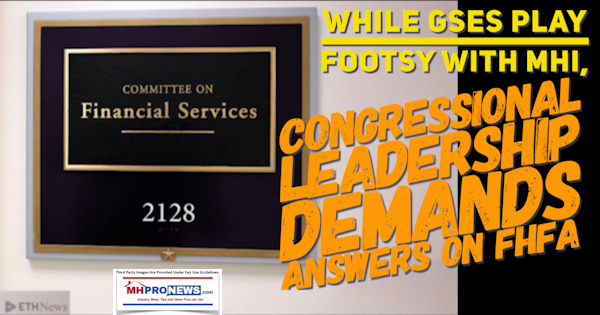 There are people in Washington, D.C. that are demonstrably fighting for the interests of small businesses and consumers.

Chairman Jeb Hensarling (R-TX) has raised concerns over improper lobbying efforts by the GSEs, which was also previously reported to the industry by MHProNews.

The Government Sponsored Enterprises (GSEs) of Fannie Mae and Freddie Mac have both been giving money to the Manufactured Housing Institute, as has also been previously reported.  See but one example captured in the photo below from an MHI event.

The Manufactured Housing Association for Regulatory Reform (MHARR) has been pushing Congress, as well as the FHFA, for a full and proper implementation of their Duty to Serve requirements, including the use of robust use chattel financing.

Sources at MHI, and with the GSEs, tell MHProNews that no serious chattel lending is currently being done by either of the GSEs.  There are reasons to believe that closed door meetings between MHI, industry lenders, and the GSEs may have resulted in deals that kept them from entering the chattel market, in spite of the law.  See the related reports, below the by-line.

With that backdrop, here is the latest from Chairman Hensarling,

“As was demonstrated at the Committee’s hearing on September 27 with FHFA Director Mel Watt and FHFA’s Inspector General, this country’s government-run housing finance system is broken. The FHFA has failed as both the conservator and the regulator of the Government Sponsored Enterprises.

The FHFA Inspector General’s report confirms this fact, and it is yet another indictment of our broken housing finance system. The report details ‘four serious management and performance challenges facing the Agency’ for 2019, running the gambit from repeated failure to exercise proper oversight as conservator to failure to adequately address ‘critical risk’ as the Enterprise’s supervisor.

Hensarling is arguably correct.  But is there any reason to believe that MHI will do anything on this issue?  ICYMI, it need a refresher, see the related reports, linked below the byline. “We Provide, You Decide.” © ##   (News, analysis, and commentary.) (Related Reports are further below. Third-party images and content are provided under fair use guidelines.)

To see a sample of our emailed news update, click here. To sign up for the factory-built home industry’s #1 headline news, click here or the graphic above.
2) To pro-vide a News Tips and/or Commentary, click the link to the left. Please note if comments are on-or-off the record, thank you.