The President of the United States (POTUS), Donald J. Trump’s agenda could be described as a blend of common-sense Republican, Democratic and Independent political positions. His policies aim to correct problems that have dogged our nation for decades, regardless of which party holds the Oval Office.

As an example, when did we last see a winning Republican primary candidate rebuke a president in his own party for his policies, as well as the policies of his Democratic predecessor?

Candidate Trump had the guts to take on what he described as POTUS Bush 43’s and POTUS Obama’s foreign affairs and trade strategy blunders.

Mr. Trump was equal opportunity in his critique of what’s gone wrong for the “forgotten Americans.”

His team’s proposals were embraced by blue collar Democrats, Tea Party Conservatives, independents, and a host of others, while challenging political and media elites. Mr Trump routinely defied political correctness and gravity, with millions responding to his straight talk.

Our new POTUS has defiantly staked out “America First” positions that go contrary to some traditional Republican and Democratic stances, on matters such as open borders and free trade.

For example, promoting “smart trade” rather than “free trade” deals that shipped U.S. manufacturing and jobs overseas. The new administration is taking on pro-business, pro-domestic energy, pro-growth and pro-jobs approaches.

In a string of executive moves and nominations, the White House is leading-the-charge to restore a safer nation with a more robust economy.

Investors and the stock markets are responding positively. Small business optimism has soared.  One of my personal favorite lines so far is Vice President Mike Pence saying that the new administration was going to be “in the Promise Keeping Business.”

The opposition among left-leaning Democrats has witnessed paid protestors leading demonstrations that resulted in cases of violence and destruction of private property.  Those billionaire George Soros connected efforts are described by pro-Clinton media wags as if they were real, organic protests.

They’re not. They’re staged events, made for TV, the New York Times, Washington Post and other like-minded, left-of-center media to “report.” They might be described as “faked news.”

Efforts to slow-walk POTUS Trump nominees, or to illegally leak information to embarrass the White House, are examples of the left’s game plan to stop the president’s agenda.

Let’s be clear.  If the president, Congressional Republicans, and enough moderate Democrats work together to enact his pro-growth agenda, the next four years will lead the nation to the best economy in well over a decade.

Some Republicans are lurking in the background, hoping to undermine the president too.  RINOs are only too happy to weaken the “Drain the Swamp” presidential initiatives — if they can do so without looking like traitors to their own party.

But how can that be kept going beyond his 4 or 8 years in office?

The answer may be found below.

Let’s survey why the president ought to consider implementing a variation on a concept POTUS Franklin D. Roosevelt floated, but never accomplished. 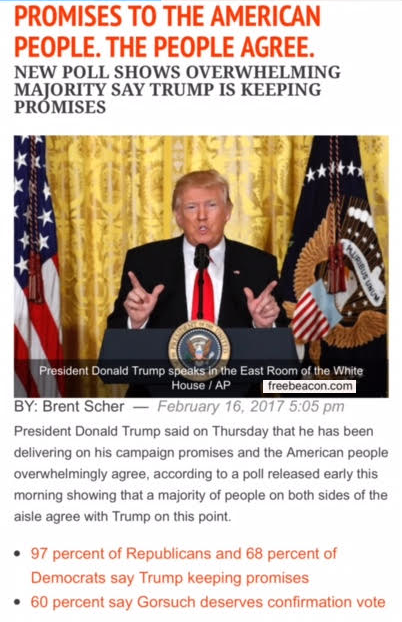 What the U.S. has experienced for decades has been a pendulum swinging back and forth in DC that has resulted in less economic growth and more division in our nation.  The Trumpian coalition has always been there, because America is still very much a center-right nation.

Millions in that same center-right coalition of Trump supporters turned several blue states red after President Obama took office.  Governorships and about 1,000 seats at the federal, state and local level have flipped to Republican control. Almost 2/3 of the states are in Republican control.

That last point is the one that makes a golden, historic opportunity for a president – not afraid of bold, decisive plans and action – possible.

By mobilizing his passionate base of supporters, via social media and live rally events – like the one planned for Melbourne, FL this Saturday – our businessman president could set a course that would be extremely difficult for the left to reverse. Here’s how.

President Trump could initiate the legislative steps necessary to reset the number of Supreme Court Justices from 9 to 11, or even 15.  We should remember that over the years, the number of “Supremes” has fluctuated from 6 to 10, per History.com (1).

That done, let President Trump nominate, and the U.S. Senate confirm, the added number of “originalist justices,” in the mold of Antonin Scalia.

That would serve to preserve the stability of law as intended, within constitutional limits.

There should also be a move to revamp the federal bench, below the Supreme Court level, framed in a fashion that prevents judicial activism.

President Trump and VP Pence have often said that the law should be enforced.  That’s common sense.  Without applying a law as intended, how can there be equal justice under the law?

So, if a judge goes rogue and changes the law on a personal whim or for political reasons, then we have made black robes matter far beyond the powers the framers of the Constitution’s intended.

Declaration of Independence and the framers of the Constitution wanted a nation of limited federal powers.  By limiting federal power to those duties specifically assigned, part of their concept was that state and local governments would be far more accountable to “We, the People.”  You or I can make the trip to the town hall, county seat or state capital far more easily than going to Washington, DC.

Those limits were slowly subverted, by members of both major parties. Let them be reestablished, and by doing so, we’ll see not just a 4- or 8-year economic boost.  Why?  Because there would be decades of growth, as national and international investors will no longer have to worry that some new administration will skyrocket taxes or impose monopoly-making and job-killing regulations.

Originalist-minded thinkers could frame a bill that could pass the necessary states to make that change part of the Constitution via an amendment, and thus permanent. Republicans could almost do this without Democratic support today, given the heavily GOP balance of power in the 50 states.

We should also restore and expand the use of “letters of marque and reprisal.” (2)  Why not allow ex-military personnel to establish their own units to fight ISIS and other terror groups? Why not let them stop the Somali pirates raiding shipping in the Indian Ocean?

Private enterprise may do a better job of that, and with only indirect taxpayer costs based upon specific results.

There should also be required of every student a basic education in honest American history and the meaning and importance of our Constitution.

While institutions such as Hillsdale College offers free online classes on this for adults, wouldn’t it be wise to teach junior high and high school students why free enterprise is better than socialism?  Shouldn’t students be taught the truth about how socialism failed in Venezuela, Cuba, North Korea, the USSR, China or anywhere else that it has seriously been implemented?

Learning a Trade or Profession

President Trump talked about the tragedy of wasted talent on the campaign trail.   We need to return to Dr. Martin Luther King’s apt vision of the dignity and value of all honest work undertaken with excellence.

The only way to end dependency and the attraction of drugs and illegal behaviors is to create a nation where honor, labor, and morality are rewarded.  This is where the president’s call to repeal the Johnson Amendment (3) is so wise. Why should the free speech rights of religious leaders be limited, when labor, business or other leaders’ speech is permitted?

The president has the will, advisors, and savvy to make these and other changes needed to create a peaceful, new and long-lasting American rebirth.  We as a nation have been given a big second chance.

“America will never be destroyed from the outside.

If we falter and lose our freedoms, it will be because we destroyed ourselves.“

Donald J. Trump and his team can make this happen.  The thoughts above may help spark the deeper planning needed to turn concept into reality.  In that way, the American Dream will be reborn, and future generations will experience the promise that has long made the U.S.A. what President Ronald Regan called the shinning city on a hill. ##

(2) “In the days of fighting sail, a letter of marque and reprisal was a government license authorizing a person (known as a privateer) to attack and capture enemy vessels and bring them before admiralty courts for condemnation and sale.” Wikipedia.

(3) Washington (CNN) President Donald Trump reiterated Thursday a campaign promise that he used to successfully appeal to evangelical voters: a repeal of the Johnson amendment, legislation that limits the ability of religious tax-exempt organizations to endorse or oppose a political candidate. Feb 2, 2017. ###