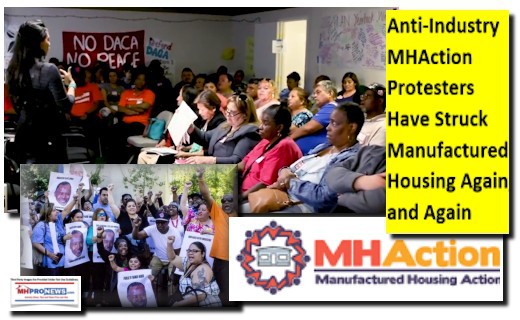 In the aftermath of last year’s Manufactured Housing Institute (MHI) annual meeting, an MHI advocate metaphorically taunted MHProNews for our reporting on looming protests of their meeting.

That skeptic isn’t doubting the forecast of MHAction protests any more.

MHAction initially targeted the MHI annual event in Orlando last year.  But a combination of disruptive factors – including a hurricane and MHProNews coverage of the predicted protests by the activist group -resulted in a change of the activist group’s plans.

Since then, as the Daily Business News has reported, MHAction has protested a Frank Rolfe event and HUD Secretary Ben Carson’s recent speech at the MHI Congress and Expo.

MHAction had only pivoted from Orlando.  There have been, and are, other MHAction efforts underway besides these two noted today.

There is a cost to getting people to a protest like these. That bus used by MHAction wasn’t free. There’s a price for MHAction’s staff.  There are expenses to organize friendly or receptive media outlets to provide coverage for their negative-coverage seeking behavior.

An MHI member told MHProNews after the attempts at disrupting Secretary Carson’s address at the Paris Hotel in Vegas that the protestors were “ineffective.”  “Secretary Carson easily turned them into a punch line,” that member told me.

While the come back from the stage by Dr. Carson was quick, the video below reveals that disruption at MHI’s event nevertheless took place.

It is one more example of a challenge that is bubbling up periodically, and which is drawing problematic media coverage for not just MHI, but for the industry they represent. The MHAction protest was mentioned by the Washington Post in their story about HUD.  This particular protest in Vegas last April at the MHI meeting has been mentioned or covered at some length by a number of progressive media outlets.

It is one more item that requires an effective response from MHI.  Even with the repeated forewarning MHProNews provided, which MHI never thanked us for, they seemed ill prepared to deal with MHAction at their Congress and Expo. You can see for yourself.

What will these media seeking MHAction protestors do next?

How will it impact the image of the vast majority of the industry’s ethical manufactured housing businesses?

Watch for an upcoming report on MHAction. To learn more about prior reports about this activist group, see those Related Reports linked below. To sign up for MHProNews’ industry-leading emailed headline news, click the link below.  It’s all part of the industry’s most popular, independent, and trusted trade media news.  MH “Industry News, Tips, and Views Pros Can Use.” © ## (News, analysis and commentary.)

After the MHProNews exposed – via a news tip – the plan by the resident activist group MHAction to protest the Manufactured Housing Institute (MHI) annual meeting last year, MHAction organizers pivoted and apparently went to ‘ Plan B.’

Whatever one thinks about their political leanings, the Washington Post is one of the most important and influential news publications in America. They decided to publish an article recently about the HUD Code manufactured housing program. More specifically, the Washington Post (WaPo or WP) wrote about the inner workings of HUD under the Trump Administration, with Secretary Ben Carson at the helm.

To provide a News Tips and/or Commentary, click this link. Please note if comments are on-or-off the record, thank you.