Every professional knows this to be true.  Success is always predicated on a system that routinely produces a reliable result; a desired outcome.

Now, against that backdrop – we will look at non-profits, the media and resident relations.

First, almost all in media are in business.  An editor knows that drama sells papers, brings more viewers or causes more click-throughs. While not everyone in media has an ‘if it bleeds, it leads’ mentality, it is a common thread.  Think about the last terrorist attack, the last – or next – senseless murder, and you know that drama moves the audience, and thus attracts those in media to cover it.

There are mainstream news stories about apartment closures, or older conventional housing that gets bulldozed for redevelopement.  These are NOT just manufactured home community news stories. 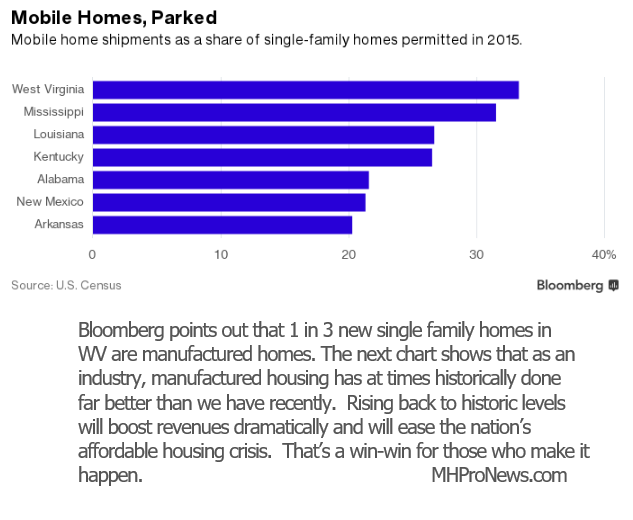 While we are years into the MH recovery, we as an industry are still thin compared to our history or potential.  The Bloomberg charts exemplify the point. So bad news harms us more in MH than it does other industries. 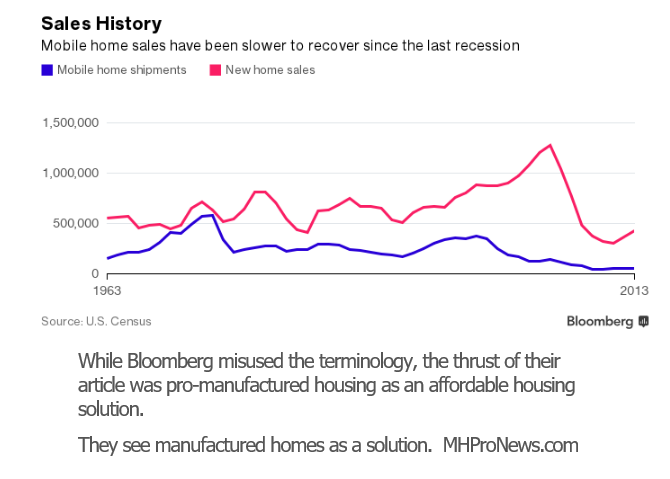 If something in MH occured comparable to what happened to BP or VW, it might have killed off manufactured housing producers

The non-profits, some of my forward thinking and successful for-profit industry friends and colleagues tell me, are powerful voices in public affairs.

Manufactured housing professionals who seek only to battle or beat non-profits are short sighted in their thinking.

Operations like CFED are akin to any MH operation, there are good points and weak ones.  But they see the value of modern manufactured homes. They are pro-affordable housing, and they have studied MH enough to believe in the quality of our product.

But when MH pros and non-profits disagree, both sides need to come together and talk issues through.  Now, I know some will say – perhaps on both sides – ‘we’ve tried that, it didn’t work.’  That’s an excuse by anyone who uses it, because some things are worth many, many good efforts. 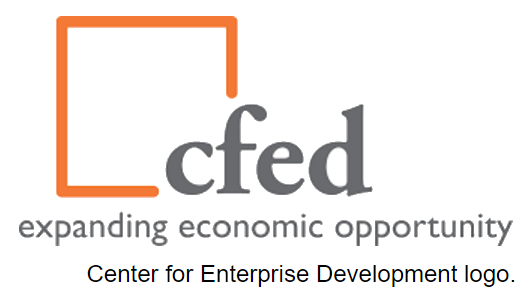 The non-profits are – potentially – among our strongest MH allies

I first reached out to CFED a few years ago, long before they took the heavy-hand in efforts akin to the Seattle Times or PBS news stories.

Being blunt, the reason that HR 650/S 682 isn’t already law is largely because of the non-profits.

That means, the for-profits failed to convince them.

In some cases, they chose to battle them and in a sense, that was inevitable. Because CFED and their allies do oppose the kind of chattel lending that two of our industry’s largest personal property lenders offer.

But that is an educational issue. We did those video interviews with Triad Financial Services’ Don Glisson Jr in part to help non-profits and

others see the light on the truth of MH Lending.  Personal property lending is simple business math, and when done properly, it works for lenders, sellers and consumers alike.

We were also blessed by those columns by Jan Hollingsworth on manufactured home chattel lending. She laid out the case on Dodd-Frank, CFPB and all of those harmful consequences that followed.

The non-profits are made up of people quite like anyone else in life.  They have an agenda, it is often good, so it isn’t always bad, wrong or in conflict with MH Pros.

We’d all agree they are correct in supporting manufactured housing as a good option that can build value and save money for millions of consumers.

Where we disagree with CFED or others – that’s obviously where each side needs to enter into a serious discussion.

One of those areas are regular hot topics in manufactured housing industry circles, because it is a hot sector. Land-lease manufactured home communities, rent control and community closures.

Thanks to the many fine, recent inputs from MH leaders and professionals on Industry Voices, we have the start of the needed dialogue.

Timely topics – such as Joe Dyton wrote on Measure V, or RC Williams’ article on the battle over community owner vs residents rights are equally important part of that process.

To the degree that we as a pro-MH Industry trade publisher cover the news objectively and present the various perspectives – strongly noting that of MH Pros – the mainstream media and others who make an influence policy will find us relevant.

That relevance is important to MH. Who says?  Tim Williams.

I’d have to be deaf, dumb and blind not to know that some in manufactured housing leadership roles have been – nervous to put it politely – about some of the topics we have taken on this year.

Rest assured, each and every time we tackle an issue, we’re doing so because we sincerely believe it to be for the long-term good of the MH industry. Your Masthead writer is not suicidal – fire properly handled can be useful – and I’m goal and solution oriented. 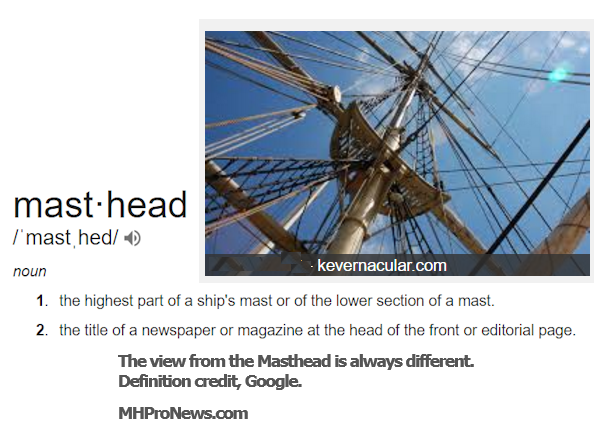 Navigating all the nuances and issues of the many industry and other groups may require threading the needle, and that’s just fine.

Part of that long-term good includes tackling thorny issues like community closures, aggressive rent increases in communities and the like.

Not moi, but highly invested attorney and fast-rising UMH Properties CEO, Sam Landy had some powerful things to say about those topics this month.  Others have sounded off on that or other hot-button issues, in alphabetical order:

These and other Industry Voices we’ve quoted in recent weeks are the START of a conversation on nettlesome issues, such as rent control – and its perceived causes, goals and realities.

Look carefully at what Paul Bradley says, because he makes important points that forward thinking for-profit operators could agree with.

Sam Landy politely stresses something similar. What Measure V seeks to stop, Landy’s large, growing and successful company does on its own.

Before Green Courte Partners sold out their MHC assets to Sun Communities, a top level exec there told me privately about something that was pretty public. They had pro-resident, “good neighbor” policies. They paid off.

Being pro-resident is good business.  Duh!  Why do we even have to say it?!

Just as obvious, being pro-consumer and pro-resident doesn’t mean that they are always right.

In the wake of our Cal-Am story, I was called by a resident-group organizer.

We spoke for nearly 40 minutes.  I listened, asked some questions and listened some more.

Near the end, I explained that I’ve been a resident too, and that I’ve played a role in the management of many communities – in supervisory roles and as consultant – for well over a decade. I then pointed to Paul Bradley’s column and said, we need to be thinking in terms of mutual victories.

ELS may not realize it, but gratis I helped them head-off a problem at one of their properties over a year ago.  A different resident group contacted me about a location of theirs, with the kinds of concerns you might expect. After hearing their thoughts, I explained why organizing group protests and causing a storm of negative media coverage results in harming the home values of everyone in the communities where they protest.

That specific group had not thought about that aspect of the matter before.  But frankly, ELS could not have said that to them, and been credible.  As an independent – yes pro-MH Industry and pro-consumer publisher – I could.

We are pro-free enterprise.  Socialism always fails in the end. But that doesn’t mean that free enterprise is perfect.  The marketplace works best when the true interests of all parties are addressed, as Jim Ayotte suggested.

Sheila Dey is right – see her and Jim’s links above – rent control is wrong for California – and the rest of the nation too.

We will promote SOLUTIONS on MHProNews.com and MHLivingNews. Cheerleading works only to the extent that you have a team that is able to put points on the scoreboard. Reality and honest motivation must meet, and embrace.

With the help and support of industry pros like yourself, we can tackle the thorny issues – for the long term good of the industry.

Our advertisers and sponsors – who may at times feel uncomfortable – still know we have the biggest audience of its kind in manufactured housing trade journalism. Tackling controversies brings readers – so honest examination of issues has its value and rewards.

Ignoring a toothache doesn’t make it go away, does it?

As we approach our 7th anniversary of publication, we proudly say we are agents for positive, profitable change.

Doing things right would be worth no less than $45 billion dollars annually in money now going to other housing options.

Do you as a community operator, retailer, producer or supplier want your part of that $45 billion? Duh, right?

For-profits, non-profits, resident groups – by working together – can produce more good mainstream media news stories, like the ones we routinely spotlight here.

The system – the method to what some might think madness – is that the truth well told is powerful!

MH Pros should address issues, not bury them.

Let’s fix what is wrong, and celebrate what is right.

Let’s pick up that $45 billion dollars lying on the table, because another $100 billion a year awaits after that, once pick up that first $45B.

We need to heal the family divisions. It’s doable. It’s profitable. It’s the right thing to do.

None of us among the quick can ever be perfect, we are human.

But the better we get at doing what’s right on issues raised in the Industry Voices and Daily Business News items noted above, we hasten the day that our sales skyrocket, more homes will be sold – and more manufactured home communities will be filled, planned, developed and those new ones will get filled up too.

The right thing to do, is the smart and profitable thing to do. That’s a simple system, isn’t it?

The truth well told by credible voices is powerful. ##