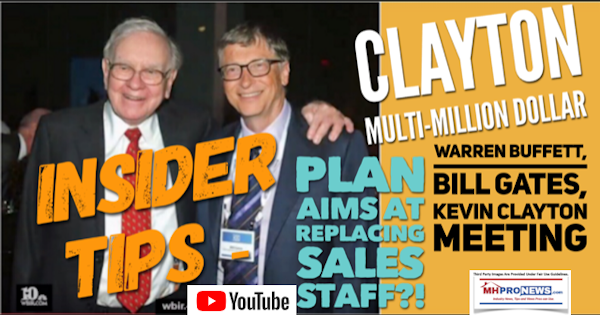 Informed sources with and connected to Clayton Homes reveals new angles on an emerging, as well as previously stories.

According to sources, in under 2 years, Clayton Homes has and will invest some $55,000,000 in technology tied to the manufactured home buyer’s shopping experience.

Clayton has demonstrated some of their virtual tour technology at the Louisville Manufactured Home Show in the past. So that part of the tale isn’t new.

Customer downloadable apps are likewise not news to those who are close Clayton Homes watchers.

But what will be news for many – including for some on the Knoxville, TN based firm’s team is the notion that Clayton is moving incrementally toward a system that, per sources, aims to minimize the role of retail sales people in the company.

Rephrased, sources claim that sales people are being slowly replaced with technology. Think of it as “the competitive Moat” principle pointed within Clayton, much like it is pointed outward at the balance of the manufactured housing industry.

‘Think about it. Every home that they sell a new manufactured home without a sales person’s commission involved would go straight to their bottom line,’ according to one insider source.  That’s a huge competitive advantage, and that indeed fits the Berkshire vision of the strategic moat.

One of several such examples is shown in their video below.

This fits the narrative from a prior Daily Business News on MHProNews report, found in the linked image/text box below, that once Clayton completes their effective domination of manufactured housing, the Knoxville metro based firm will be able to cut back the pay of their general managers.

“It’s all about deepening and widening the Clayton moat.”  Short term, Clayton is raising pay – for example – for factory workers, even as they are slowly being replaced by increased automation at Clayton Manufacturing facilities.  In time, that trend could reverse when labor demand declines, that’s how the principle of the ‘law of supply and demand’ works.

Those trends in turn then point outward against other producers and retailers.  That’s part of the process described by sources which explain the methods by which the “Clayton Moat” widens as deepens.  As previously reported, more voices are speaking out against the manufactured housing giant.

The mainstream video above includes these publicly posted comments on that YouTube page, shown under the video.

There are several indications from Clayton online that suggest this is a plausible hypothesis. Among them, per insiders, are video reports by local Knoxville metro media, where Clayton Homes is based.

As the local media reports reflect, no details of the meeting of Buffett, Gates, and Kevin Clayton were released.

While Kevin Clayton publicly says they have a ‘culture of transparency,’ their failure to answer basic questions about issues like their “Trojan Horse” style “new class of homes” scheme for manufactured homes, and how that has arguably weaponized the Duty to Serve against manufactured housing instead suggests otherwise.  The Clayton/Berkshire brands dominated Manufactured Housing Institute (MHI) likewise has repeatedly ducked questions about these important issues for consumers, current manufactured home owners, and thousands of independent industry professionals alike.

That said, if a Clayton executive wishes to explain or clarify any of these allegations from within their firm or from other sources, as usual, MHProNews is open to updating a report, based upon new evidence.

Clayton has, per sources, talked about benefits that are accruing to their firm due to Berkshire’s synergies with tech firms, including IBM and Microsoft.

At this point in time, the “Clayton Moat” should be understood as Kevin and Warren Buffett have framed themselves framed the issue. ICYMI, or need a refresher, click on the image/text box below for a report with documents, videos, and ‘follow-the-money’ evidence.

Their goal is to deepen and widen their moat, period. Or as a Clayton team member messaged in defense of Clayton’s business practices, ‘What’s wrong with crushing the competition?’

A basic web search did not find any online corroboration for this $55,000,000 figure investment claim. That suggests that MHProNews has another industry first, news item. For confidential and/or ‘on the record’ news tips on Clayton, MHI, and other industry relevant topics, use the link here or to the left of the author’s photo, further below.

Independents, take note. While there are strategies available to counter such trends, the logic of their goal is just as that Clayton trained team member said, to crush competitors.

After the Smoking Gun/21st Mortgage revelations, this would be no surprise.

The ultimate defense is multilayered, including breaking ties with their puppet Monopolistic Housing Institute (MHI), errr, Manufactured Housing Institute, supporting antitrust action against Berkshire, and working to end other monopolistic developments in America.

MHARR has long advocated for the post-production sector to establish a new association that is not under the thumb of Clayton and the Berkshire Hathaway connected lenders and other firms that operate in manufactured housing.

Washington, D.C., November 15, 2017 – The Board of Directors of the Manufactured Housing Association for Regulatory Reform (MHARR) has authorized the public release of a comprehensive internal study by the Association of the past, present and future representation of the post-production sector (PPS) of the federally-regulated manufactured housing industry.

The issue of #OpenMarkets is a pressing one for the industry, and the nation at large.  With both Democrats and voices within the Trump Administration voicing an interest at taking on antitrust issues, there are reasons to believe that the next year or two could provide more visible movement on an issue that sources have told MHProNews are already underway in Washington, D.C.

To be forewarned and act according is to be better prepared. More tips from Clayton team and other industry members can be provided via the link to the bottom left, below. That’s “Industry News, Tips, and Views Pros Can Use,”  © where “We Provide, You Decide.”  © ## (News , analysis, and commentary.)

“Marxists believe that they have a right to take the property of others,” “Socialism is Theft” – Rick Manning – Daily Torch, ALG; plus, Manufactured Home Investing, Stock Updates

“Executive Committee and staff of MHI are open and eager to work with MHARR to pursue a set of mutually agreed upon goals to advance and safeguard our industry.” – MHI Leader to MHProNews

“Anyone with eyes can see what’s happening,” “The American people are being told a lie by the media.” Plus, Manufactured Housing Investing, Stock Updates