As with many things in life, the matter of park closings is highly complicated with few easy answers.

Probably the best answer is to allow the park residents the option to purchase the property. Not fool proof, but meets the burden of the failure of the park owner to allow residents to maintain the perpetual rental of space for their home, which is implicit in buying a home in the property.

When most (manufactured home community residents) buy a home in the property, rarely if ever is he handed a notice that the community could be closed on short notice, their only relief being whatever measure their state or city has for park closings. Most residents rarely consider park closings as a threat till the specter arrives.

On the other hand, in a capitalist nation we still behave in some areas as though the park owners have no legal responsibility to allow the residents to stay, and can sell the property to others at will, and empty the community with little hindrance or concern, again, subject to whatever relevant laws control the closing.

I have been surprised in areas where park closings are common that authorities do not compel a statement be given in writing as part of the move-in process alerting the new resident of the right of the park owner to sell or close the community and what compensation, if any, is available to the resident on closing.

I’m also wondering, but not enough to research the subject, whether upon notice of closing, residents should get an attorney to plead their case that the park owner allowed them to have a home in the park, often encouraging their entry, knew or had reason to know most people would get a long term mortgage to purchase their home. Often at closure, many years mortgage term remain unpaid. It is here the lender gets the downside loss, and is not particularly beneficial for the home owner.

Remember, it is not unusual that when the home must be moved or resold because of a closing, the stars do not line up well for the home owner. First, the home must be moved, there as a cost of moving and the difficulty of finding a lot to accommodate the home. Quite a hand full, usually not ending well, unless the state laws give some protection to the resident. The process is pretty destructive of our financially fragile customer base.

Frankly, this mercenary park closing without adequate compensation for the resident is morally wrong if not legally. It does no credit to the industry that so much of this happens.

Meanwhile, I was amused that people are forming groups to try to save endangered parks to keep them open.

I wondered where these folks were in the 1970s when I was doing park development zoning in the north east.

At virtually every meeting, the facility used had to be upgraded to the school gym to handle all the attendees. All seem to me to be carrying tar and feathers and had mean looks in their eyes. How many parks could have been built to accommodate the demand had there been far less resistance? Who knows, but far more. And it continues even today.

I guess that train has passed, but the California boys being pretty bright, I’m sure they are still trying to build parks in less expensive land areas. How is that going? ##

(Editor’s Note: The commentary above is in response to the mainstream media article, linked here. Lavin is the winner of MHI’s Totaro Award for his lifetime contributions in financing, was a mobile and manufactured home retailer, as well as  an owner/operator of manufactured home communities.  Some of Lavin’s other insightful, popular commenataries are linked below.) 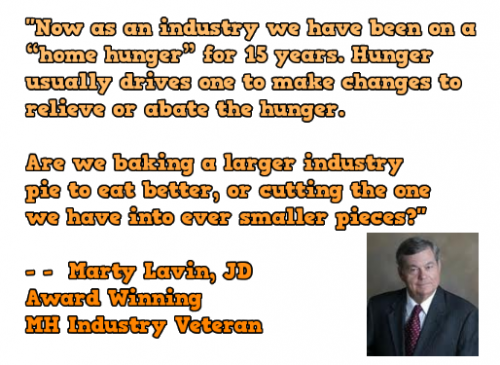