If you, like me, are somewhat totally perplexed by the apparent “stalemate” our duly elected members of Congress are in, perhaps it’s because in recent years they’ve “risen” above us all . . . or have they?

– Children of Congress members do not have to pay back their college student loans.

– Staffers of Congress family members are also exempt from having to pay back student loans.

– Members of Congress can retire at full pay after only one term.

– Members of Congress have exempted themselves from many of the laws they have passed, under which ordinary citizens must live.  (For example, they are exempt from any fear of prosecution for sexual harassment.)

– Congress has exempted themselves from Healthcare Reform, in all of its aspects.

We must not tolerate an elite class of such people, elected as public servants and then putting themselves above the law.

It doesn’t matter if they are Democrat, Republican, Independent, or whatever. The self-serving must stop.

Governors of 35 states have filed suit against the Federal Government for imposing unlawful burdens upon their states. It only takes 38 (of the 50) States to convene a Constitutional Convention.

If each person that receives this will forward it on to 20 people, in three days most people in The United States of America will have the message.

This is an idea that should be passed around to all who support our Republic, regardless of political party. 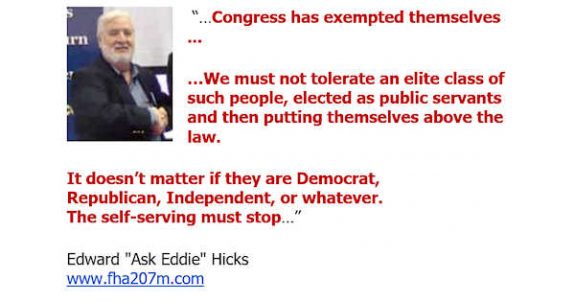 1. No Tenure/No Pension. A Congressman/woman collects a salary while in office and receives no pay when they’re out of office. And, no more perks go with them.

3. Congress must purchase their own retirement plan, just as ALL Americans do.

4. Congress will no longer vote themselves a pay raise. Congressional pay will rise by the lower of CPI or 3%.

6. Congress must equally abide by all laws they impose on the American people (i.e. NO MORE INSIDER TRADING!!!).

Serving in Congress is an honor and privilege NOT a career. The Founding Fathers envisioned citizen legislators should serve their term(s), then go home and go back to work … not get all kinds of freebies.