Disney Springs in Orlando, FL has been discovered openly using offensive, inaccurate terminology deemed prejudicial towards factory-builders and the over 22 million Americans in the U.S. – plus others in Canada – who live in pre-HUD Code mobile homes, modular housing, and HUD Code manufactured homes.

Near the Disney Springs Strawberry parking area where thousands walk by daily, the photos shown were taken on Christmas Day, 2018.

It is unclear at this time how long those modular office units have been at that location.

But what is clear is that the units themselves are labeled as “modular,” which the photo shown above reflects. That modular standard is no doubt the commercial construction code the units in question were built to meet.

On a different, but similarly problematic nomenclature issue, Mark Weiss, JD, President and CEO of the Manufactured Housing Association for Regulatory Reform previously said as follows.

Likewise, manufactured housing advocate, the Rev. Donald Tye, Jr. said as follows about such troubling use of inaccurate “t-word” terminology.

When the National Association of Realtors™ (NAR) Realtor University™ researcher Scholastica ‘Gay’ Cororaton, CBE, was contacted last summer about a problematic use of the term “mobile home” in their research documents. She not only promptly responded with a ‘thank you’ for bringing the needed correction to her attention, she had all of the errant NAR documents, graphics, and blogs changed to reflect the proper phrasing. Cororaton then went a step further, and noted Mark Weiss, JD, and MHProNews publisher L. A. ‘Tony’ Kovach in their revised report’s first footnote, as shown below.

MHProNews plans to contact Disney Springs’ management/public relations office about the issue later today, and will follow up this report to state what corrective measures – if any – Disney management will take as a result of this matter being brought to their attention.

“About one in ten Floridians live in a mobile or manufactured home, with others living in modular or some other form of prefabricated housing construction,” said L. A. ‘Tony’ Kovach, co-founder and publisher of the industry’s most-read trade publication, MHProNews.

Potentially thousands walk by that locale daily. So the negative impact of that signage is multiplied and grows over time. But there is also the message being given to the Disney “cast,”  who may be incorrectly led to think that errant term “trailer” is an acceptable term in this case, when it clearly is not. 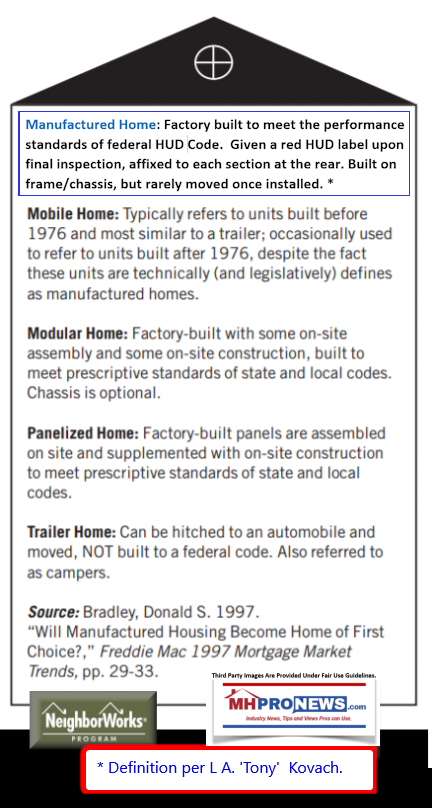 “Hopefully, this is just an oversight by Disney, the result of ignorance rather than an intentional insult to factory-builders and those who reside in a factory-crafted dwelling,” Kovach said. “But if Disney doesn’t correct this error promptly, and make it clear to their staff – who Disney refers to as “cast members” – that the term “trailer” for the description of a housing or office units that aren’t RVs is improper, prejudicial, and offensive, then we will bring the matter to the wider attention of the tens of thousands of the industry’s professionals.  We could also draw the issue, as needed, to the attention of the millions of residents of the mobile, manufactured, and modular housing communities. If necessary, we’ll also do a follow up report on MHLivingNews, with manufactured home resident groups – and via media contacts – to others in mainstream news forums.  Our hope is that they’ll make a correction, and will instruct their cast about the proper use of terminology in this matter.”

MHProNews will update readers on the Disney Springs controversy, just as we did on the NAR and other similar topics, as previously reported here on the Daily Business News.

That’s this morning’s “News through the lens of manufactured homes, and factory-built housing,” © where “We Provide, You Decide.” © ## (News , analysis, and commentary.)

Portsmouth, New Hampshire assistant mayor Jim Splaine is doing what he can to put an end to the stigma that’s often felt by people who live in manufactured homes. Too often, the areas where manufactured homeowners live are improperly referred to as ” trailer parks.”

Taking on the Trash Talk! Are People Defined by their Housing Choice? Video, Photos – manufacturedhomelivingnews.com

Lois Requist is retired. She’s an author, and the former Benicia, CA poet laureate. She recently moved into a manufactured home in a community in San Francisco metro. Terry Reynolds has a manufactured home too. Reynolds and his wife own a triple sectional, Requist has a more modest, yet still appealing, multi-sectional.

An eye-opening statement from a National Weather Service (NWS) expert reveals that tornado related risk of death for residents of mobile or manufactured homes are being improperly warned, and reported. Before diving into that exclusive, written statement from NWS, it is instructive to look at the safety, durability, and quality issue about factory-built homes in a broader way.

“Marxists believe that they have a right to take the property of others,” “Socialism is Theft” – Rick Manning – Daily Torch, ALG; plus, Manufactured Home Investing, Stock Updates

“Executive Committee and staff of MHI are open and eager to work with MHARR to pursue a set of mutually agreed upon goals to advance and safeguard our industry.” – MHI Leader to MHProNews

“Anyone with eyes can see what’s happening,” “The American people are being told a lie by the media.” Plus, Manufactured Housing Investing, Stock Updates