The White House and the GOP are aglow, but oddly so are Democrats.  Can they both be correct in their projections?

After over a year of investigations, by often leak-prone federal officials, months by special counsel Robert Muller, and much of the left-of-center mainstream media scrambling to find evidence of an illegality by the president, a Democratic senator says, no joy yet for their hunt for impeachment.

We have reports from both the left-and-right wing media in Washington, and both upon careful review look to be favorable to the president and the GOP.  Those will be our spotlight report, found deeper below, tonight.

The President and the GOP are celebrating, but pushing ahead on the looming budget deal needed for tomorrow. Meanwhile, Democrats and left-leaning media – after weeks of counter-claims – suddenly admit that the tax deal will yield the promised benefits to “8 out of 10” middle class households.

And a Democratic senator says on left-of-center MSNBC that it is “premature” to talk about “impeachment,” which means that after over a year of (witch?) hunting, there is still no smoking gun evidence of any wrongdoing by the 45th president.

All this hold true to the months of prior reports and analysis you’ve found only on MHProNews in the manufactured housing industry’s media.

Translation, we do our research, so it pays for you and others to be a reader here. Because we strive to make clear the facts and the truth about what often complex and competing claims from across the political and economic spectrum.  That research means that Daily Business News industry professionals and investors discover useful “Industry News, Tips, and Views Pros Can Use” ©…daily!

“Democrats, routed but unified against the tax bill, plan to make it the centerpiece of a midterm campaign — one that may play out in a growing economy where the worst predictions about the tax cuts fall flat. Republicans, who once hoped that Democrats would feel pressured to back the bill, now suggest that voters will learn that the Democrats misled them.

“If we can’t sell this to the American people, we ought to go into another line of work,” Senate Majority Leader Mitch McConnell (R-Ky.) said after the bill’s passage,” WaPo’s report and analysis said.

“In a separate Power Post entry, Hohmann cautions that “The tax bill is likely to become more popular after passage.” He begins by running down a list of the most recent and decidedly dismal polling. One NBC – Wall Street Journal poll found that only 24% of respondents think the plan is a good idea and a plurality (37%) believe that the middle class will pay more. CNN’s survey finds an identical 37% think their families will be worse off because of the tax cuts. (!?)” said HotAir, about the WaPo column.

WaPo then said, “But here’s the truth: 8 in 10 Americans will pay lower taxes next year, according to the nonpartisan Tax Policy Center’s analysis of the final bill. Only 5 percent of people will pay more next year. Mostly, those are folks who earn six figures and own expensive houses in places with high local taxes, such as New York and California…

I interviewed a dozen GOP operatives yesterday about how they plan to deal with this issue in 2018. They said the numbers right now are so bad that they can only get better. They freely acknowledged the head winds, but they see an opening to sell the cuts and insist that perceptions are still not fully baked. They’ve conducted focus groups and commissioned polls to figure out the talking points that are most likely to move the needle, and they’re planning multimillion-dollar advertising campaigns to drive those messages…

Republicans have a lot of upside potential with their own base. The NBC-WSJ poll finds that only 53 percent of Republicans and 57 percent of Trump general election voters currently back the tax bill. Even worse, just 28 percent of rural Americans and 29 percent of whites without a college degree think it is a good idea right now. Trump’s overall popularity may be at a record low in the survey, but these are constituencies he can persuade.”

HotAir’s pundit concludes in his review of the WaPo admissions,  “How, in any sane reading of the tea leaves, do you expect to spend the entire year running against a set of tax cuts which are going to result in more than three-quarters of the country taking home more money every payday? By arguing that it’s going to blow another hole in the deficit? Don’t make me laugh. That upsets a tiny fraction of voters (like yours truly) but we’ve been trying to sell that message for the past ten years. People don’t care.” 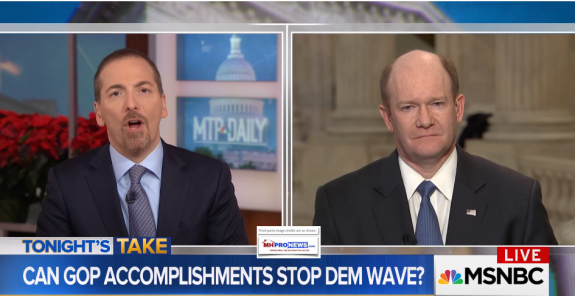 Meanwhile, at the right-of-center Washington Examiner…

They cited the White House in compiling this list of 12 categories and 81 success items for the president so far in 2017.

Below are the 12 categories and 81 wins cited by the White House.

Jobs and the economy

Restoring confidence in and respect for America

NOTE: the chart below covers a number of stocks NOT reflected in the Yahoo MHCV, shown above.

Your link to a recent round of industry praise for our coverage, is found here.