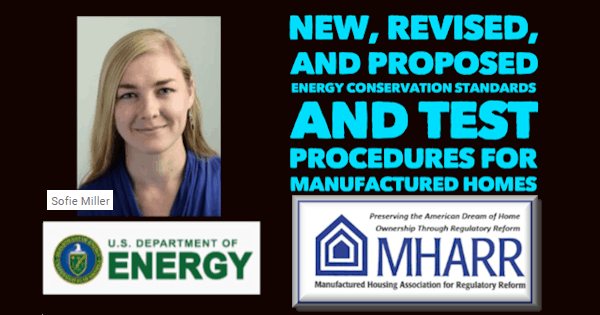 Dear Ms. Miller:
The following comments are submitted on behalf of the Manufactured Housing Association for Regulatory Reform (MHARR). MHARR is a Washington, D.C.-based national trade association representing the views and interests of producers of manufactured housing regulated by the U.S. Department of Housing and Urban Development (HUD) pursuant to the National Manufactured Housing Construction and Safety Standards Act of 1974 (42 U.S.C. 5401, etseq.) (1974 Act) as amended by the Manufactured Housing Improvement Act of 2000 (2000 Reform Law). MHARR was founded in 1985. Its members include independent manufactured housing producers from all regions of the United States.

On February 13, 2019, the U.S. Department of Energy (DOE) published a proposed rule in the Federal Register[1]that would significantly modify its procedures for developing new or revised energy conservation standards and related testing procedures for consumer products, “appliances,” and certain commercial and industrial equipment. Among other things, the February 13, 2019 proposed DOE procedural rule would: (1) expand various procedural protections to the development of testing standards for regulated products; (2) define “a significant energy savings threshold that must be met before DOE will update an energy conservation standard;” (3) address issues related to the cumulative regulatory burdens imposed on regulated products and consumers of those products; and (4) “clarify DOE’s commitment to publish a test procedure six months before a related standards [Notice of Proposed Rulemaking].”

Moreover, the fact that such fundamental procedural protections – now deemed necessary and, indeed, essential by DOE itself – were notaccorded the industry and consumers in the DOE manufactured housing negotiated rulemaking and subsequent related proceedings, constitutes yet another basis  (among many others previously detailed by MHARR) for the withdrawal of any and all previously-proposed versions of the DOE manufactured housing standards – developed under or derived from — the inherently tainted DOE “negotiated rulemaking” process, and the ultimate development of a new rule (if necessary) based on a legitimate and lawful standards-development process consistent with the regulatory policies of the Trump Administration.[6]The application of the new procedural rule to the manufactured housing energy rulemaking, could also help to assure that any future revisions of that rule are not subjected to the same type of coordination between part of the industry and energy special interests that led to the fatally-tainted and illegitimate “negotiated rulemaking” which resulted in both DOE’s original 2016 proposed manufactured housing energy standards rule and subsequent 2018 NODA proposal.

Accordingly, for all of the foregoing reasons, MHARR asks that DOE, in any final rule in this matter, expressly apply all pertinent procedural protections and safeguards, as set out in its February 13, 2019 proposed rule for the appliance standards program, to any manufactured housing energy conservation standards, revisions thereto, or any applicable testing procedures developed by DOE pursuant to EISA section 413.

[2]Portions of the proposed procedural rule, such as provisions relating to American Society of Heating, Refrigeration and Air Conditioning Engineers (ASHRAE) reference standards, would obviously not apply to manufactured housing standards as defined by section 413 of EISA.

[5]See, NODA Packages, Draft Results, July 2018, at p. 2: “Incremental cost and savings calculations are based on methods and data presented in the 2016 NOPR” which, in turn, derived from the 2014-2015 DOE negotiated rulemaking process under the auspices of DOE’s Appliance Standards and Rulemaking Federal Advisory Committee (ASRAC).  Seealso, 81 Federal Register, supra, at p. 39763, col. 3, noting that DOE applied the same “analytical framework” for manufactured housing standards “that DOE uses for developing energy efficiency standards for appliances.”