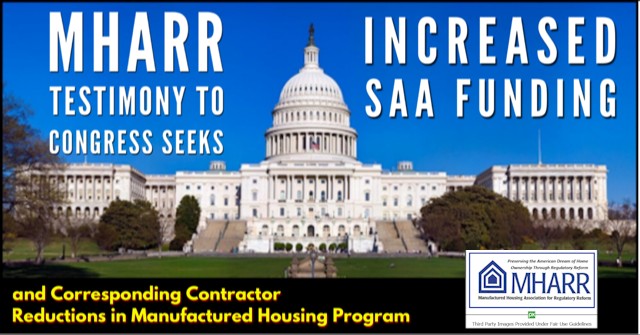 Washington, D.C., May 10, 2019 – With manufactured housing production levels heading downward again in 2019, the Manufactured Housing Association for Regulatory Reform (MHARR) has once again called on Congress, in appropriations legislation for Fiscal Year (FY) 2020, to direct HUD to reduce funding for its bloated, over-grown program “monitoring” contract and, instead, direct a corresponding amount of overall program funding to increase payments to its State Administrative Association (SAA) partners.

In written testimony ( copies attached ) submitted on May 9, 2019 to both the House and Senate Transportation, Housing and Urban Development and Related Agencies Appropriations Subcommittees, MHARR points out that funding for the monitoring contract – with an entrenched 40-year-plus contractor and multiple pseudo-governmental functions that should not be performed by a contractor – has grown steadily, even as the production of new manufactured homes remains at levels far below historical averages.  At the same time, HUD funding for SAAs, which provide front-line consumer protection for an ever-growing number of both new and existing homes, has declined in relation to those same historical production averages, leading a number of states to consider leaving the program.

In Washington, D.C., MHARR President and CEO Mark Weiss stated: “If Trump Administration regulatory reform policies are to have any impact at all – and any staying power in the future – it is essentialthat the HUD manufactured housing program monitoring contract be pared-back, while SAA participation in the program is assured and properly-funded as well.  Congress can assure this by reducing contractor funding while directing HUD to devote additional corresponding funding amounts to the state SAAs.  The resulting benefits for both the industry and consumers would be extremely significant.”