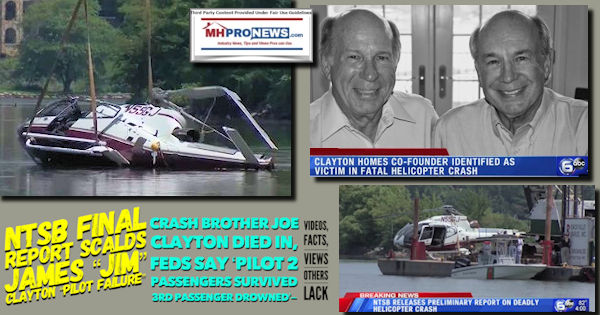 “The helicopter pilot [James L. “Jim” Clayton Sr.] was returning to his property located adjacent to a river,” says the opening in the official paragraph by the National Transportation Safety Board (NTSF) in the on the helicopter crash that killed his brother, Joseph “Joe” Clayton. The report about the co-founder in 1966 of Clayton Homes mobile and later manufactured housing producer contributing role in that incident continues: “As the helicopter descended toward the water at a 25° angle with low forward airspeed, the pilot applied power to arrest the descent. However, the helicopter continued to descend until it impacted the river short of the intended landing area. The pilot and two passengers survived the impact and a third passenger drowned.”  “On August 3, 2020, Clayton, along with his brother Joe, Clayton Holdings VP Flynt Griffin, and developer John McBride, were onboard Clayton’s Eurocopter EC130 when it crashed into the Tennessee River near the Sequoyah Hills neighborhood of Knoxville around 7:45 p.m.[7]” says Wikipedia.

Wikipedia goes on to state: “[Jim] Clayton, Griffin, and McBride resurfaced soon after the crash near to the wreckage, and were rescued by a nearby pontoon boat. Joe Clayton’s body around 9:30 p.m, was recovered next to the wreckage of the helicopter and was pronounced dead on arrival.[8] ”

NTSB’s final report said: “The investigation revealed no preimpact mechanical malfunctions or anomalies that would have prevented the normal operation of the helicopter. Recovered flight data indicated the engine was producing power at the time of impact. Weather reports and statements from the pilot and witnesses indicated that the helicopter descended steeply with little forward airspeed and a tailwind of about 5 knots, which is a flight profile conducive to vortex ring state. The pilot’s reported lack of collective authority when increasing power to arrest the helicopter’s descent is also consistent with the helicopter entering vortex ring state. A pilot’s failure to monitor altitude, airspeed, and rate of descent during an approach can result in a flight profile conducive to vortex ring state.”

After that “analysis” summary subheading, the NTSB said the following.

Probable Cause and Findings

The National Transportation Safety Board determines the probable cause(s) of this accident to be:

The pilot’s entry into vortex ring state and his inability to arrest the helicopter’s descent while maneuvering for landing.

WATE TV said: “Joe Clayton, 84, drowned as a result of the crash.” They added that “The family is reviewing the NTSB report and has no comment at the present time,” a Clayton family representative said in a statement.

On August 3, 2020, at 1941 eastern daylight time, an Airbus EC130-B4 helicopter, N55GJ, was substantially damaged when it was involved in an accident near Knoxville, Tennessee. One passenger was fatally injured, and the pilot and two additional passengers were not injured. The helicopter was operated as a Title 14 Code of Federal Regulations Part 91 personal flight.

After refueling the helicopter, the pilot and his passengers departed McGhee Tyson Airport (TYS), Knoxville, Tennessee, about 1826 for a flight in the local area. About 1940 the pilot made a right circling approach over the Tennessee River toward a landing site on his property near the river’s edge. He stated that he “was descending with low power and a 25° angle of descent, slowing to come to a hover at low speed over the water.” He further stated that he was planning to hover taxi to the landing site at a height about 75 feet above the water and that when he added power to arrest the descent, the helicopter “started to settle.” He stated he “pulled max power to stop the settling,” but it was as if the helicopter “didn’t have any power” and it continued to descend until it impacted the river.

A witness on the neighboring property reported that the helicopter “came from the south and kind of hovered over the water pretty low.” She stated that it hovered longer than usual before tilting toward the south and descending into the water.

Examination of the accident site by a Federal Aviation Administration (FAA) inspector revealed that the helicopter came to rest on the bottom of the Tennessee River about 435 ft and 149° from the intended landing site on the pilot’s property. The helicopter’s fenestron was recovered floating nearby.

The helicopter was recovered from the river mostly intact. Examination of the wreckage revealed a large hole in the left side windshield; the left door window broken out; damage to all rotor blades consistent with water impact; and two of the four suspension bars fractured midspan. The tailboom remained attached to the fuselage, and the fenestron separated from the tailboom just aft of the ring frame.

Examination of the airframe and flight control system components revealed no evidence of a pre-impact failure or mechanical malfunction that would have precluded normal operation, and the pilot reported that there were no mechanical malfunctions or failures prior to the accident sequence.

The helicopter was equipped with a vehicle and engine monitoring display and a digital engine control unit that stored records of failure messages associated with engine operations. The data revealed no failures or limit exceedances prior to impact and indicated the engine was running at the time of impact. All failure indications occurred around the time of impact. No preimpact anomalies were noted with the engine that would have precluded the normal production of power.

According to the FAA’s Helicopter Flying Handbook (FAA-H-8083-21B), vortex ring state, formerly referenced as settling-with-power, “describes an aerodynamic condition in which a helicopter may be in a vertical descent with 20 percent up to maximum power applied, and little or no climb performance:

Situations that are conducive to a vortex ring state condition are attempting to hover out of ground effect (OGE) without maintaining precise altitude control, and approaches, especially steep approaches, with a tailwind component.

The following combination of conditions is likely to cause settling in a vortex ring state in any helicopter:

A vertical or nearly vertical descent of at least 300 fpm. (Actual critical rate depends on the gross weight, rpm, density altitude, and other pertinent factors.)

The rotor disk must be using some of the available engine power (20–100 percent).

The horizontal velocity must be slower than effective translational lift.

When recovering from a vortex ring state condition, the pilot tends first to try to stop the descent by increasing collective pitch. The traditional recovery is accomplished by increasing airspeed, and/or partially lowering collective to exit the vortex. In most helicopters, lateral cyclic thrust combined with an increase in power and lateral antitorque thrust will produce the quickest exit from the hazard.”

According to the FAA’s Helicopter Flying Handbook, hovering more than one main disc (rotor) diameter above the surface is considered hovering OGE. The accident helicopter rotor diameter was 35 ft 1 in.

The full final report and analysis by the NTSB is linked here.

The NTSB’s “factual” report, which they say can be used in civil actions that may arise from this case, are linked here.

For serious researchers or the merely curious, the news videos available on YouTube on this date span from post-accident in August 2020 to various updates since and the more recent video posted further above.  A baker’s dozen of such video reports follow.

The NTSB report said the pilot, Jim Clayton, was unable to recover from a hazardous state that caused the helicopter to descend steeply and crash.More storie…

The NTSB report says the pilot was planning to hover about 75 feet off the water and then land on the riverbank, but as the pilot throttled up slightly, the …

It has been one year since a helicopter crashed into the Tennessee River, killing Knoxville businessman Joe Clayton.

A Knoxville police incident report lists the survivors as Jim Clayton, John McBride and Flynt Griffin. The report does not list the name of the man who died.

Joe Clayton was a prominent businessman here in East Tennessee. He and his brother Jim were business partners and lifelong friends.

A Knoxville police incident report lists the survivors as Jim Clayton, John McBride and Flynt Griffin. The report does not list the name of the man who died.

The prominent Knoxville businessman died after a helicopter crash in the Tennessee River last Monday.

911 Calls are included in this video: “Details emerging in helicopter crash.”

Note the NTSB report clears up the question asked in the video above if this was a takeoff or landing incident.

A fire department report on the tragedy is posed below. Knoxville Fire Department gives update on helicopter crash on Aug 3, 2020.

The Knoxville Fire Department gives an update on a helicopter crash after 3 people escaped. One person was still reported missing.

The original NTSB Report is covered in the video below.

Prior reports, maps, stills and other illustrations dating back to the crash are found in the report linked below. May the souls of all the faithfully departed rest in peace. ##

Again, our thanks to free email subscribers and readers you, our tipsters/sources, and sponsors and God for making and keeping us the runaway number one source for authentic “News through the lens of manufactured homes and factory-built housing” © where “We Provide, You Decide.” © ## (Affordable housing, manufactured homes, reports, fact-checks, analysis, and commentary. Third-party images or content are provided under fair use guidelines for media.) (See Related Reports, further below. Text/image boxes often are hot-linked to other reports that can be access by clicking on them.)

“Pending home sales crept higher in May, ending a six-month streak of declines. However, year-over-year contract activity slid across the U.S.” So said the tweet, shown below, by the National Association of Realtors (NAR). Where is the similar monthly and other public statements from the Manufactured Housing Institute (MHI)?

The U.S. Department of Housing and Urban Development (HUD) contracts with the Institute for Building Technology & Safety‎ (IBTS) to gather data on HUD Code manufactured home production and shipments. The following is the official data on production and shipments by state. In the abbreviations that follow, SW is short for ‘single section’ or single wide manufactured homes.

Pages of the new Biden White House plan that promises to create more affordable housing to ease the U.S. housing shortage driving record rents and housing costs also postures support for manufactured homes. Manufactured housing is named some 18 times in that White House briefing, per the Word-search tool of that document.

As the Saturday Daily Business News on reported (see link further below for report dated 4.16.2022) Sandy Garrett, J.D., Chief Disciplinary Counsel for the Board of Professional Responsibility of the Supreme Court of Tennessee said the following in an email to MHProNews.