“Over the past 20 years, housing costs as a share of income have increased for middle- and low-income Americans,” per the Brookings Institution. “One of the many unique aspects of the 2020 presidential campaign is that affordable housing has become a prominent issue,” said the Minnesota Post.

Agree or not, the Los Angeles Times said just days ago that “With the 2020 presidential campaign in full swing, it is clear that the defining issue of the election will be economic inequality.” The Atlantic and NBC News are among the mainstream media outlets that have made the racial wealth gap a topic for discussion.

The Trump Administration created a White House Council on Affordable Housing. Democrats and the GOP both have housing plans. Rephrased, both Democrats and Republicans are cognizant of the issue and each have their plans to address the needs.

Observing pragmatically, those Democrats that have pinned their hopes on impeachment are seeing polling shift against it and support for President Donald J. Trump rising. If a Democrat wants to win, they are going to have to make a case beyond impeachment.

The reality is that under both Democratic and Republican administrations, various policies were getting lip-service and little practical attention. Candidates on both sides of the two major parties have said as much and the logic to support that is self-evident as the problems discussed for decades still exist. Among those issues were sliding middle class earnings, increasing housing unaffordability, growing homelessness and wealth inequality, especially for minorities.

To the Trump Administration’s credit, the rate of homeownership and earnings by ‘everyday Americans’ is on the rise. 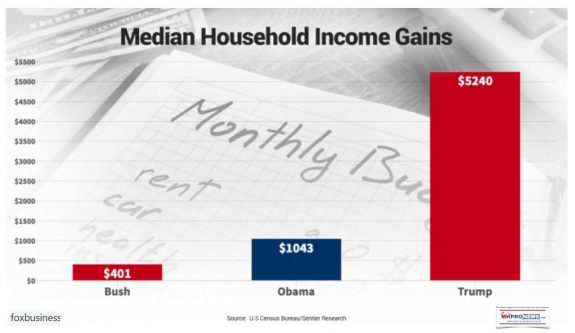 There is polling that indicates that while healthcare is still a top issue, climate change is more of a party-lines issue. When it comes to asking voters to spend more money personally to address climate change, interest among voters plummets. One need not look beyond the yellow jacket protests in more liberal France to realize that when faced with spending more, the issue of the climate just doesn’t play as well as progressives would like to think. Despite a chorus of media that says it is a real issue, there are tens of millions who believe along with the president and conservatives and media gurus like Rush Limbaugh that climate is a hoax. So, while climate change polls well among Democrats for a primary, the value of the climate issue when it comes to a general election is mixed at best.

More money in people’s wallets? More affordable housing? Those are  different stories. It was President Clinton’s strategist James Carville who said that “It’s the economy, stupid.”

Or as the New York Times said, then former governor Ronald Reagan “skewered” then-President Jimmy Carter by asking voters, ”Are you better off than you were four years ago?”

Former President Barack Obama has warned his party against going too far left. Are Democrats listening?

More household net worth? Let voters chew on that and many will pull a metaphorical lever or mark a ballot in a voting booth. The evidence is found in rising percentages of minorities that say the support President Trump and his policies.

63 million Americans voted for Donald J. Trump in 2016 knowing he was a billionaire. With no political experience, what was the candidate’s appeal?

The issues he hit were often ‘middle America’ themes.

While his opponents have called it other things, it was pitched as more safety and prosperity.

Despite howls of racism, homophobia, xenophobia, allegations of being Putin’s Russian puppet and similar attacks:

are among the factors that have observers across the left-center-right divide admit President Trump could win re-election in 2020. That’s despite more negative media than any president in modern times.

A fresh headline on the ubiquitous Drudge Report proclaimed that even some seasoned reporters are having a hard time recalling what was hot news just days ago, because the 24/7/365 news cycle keeps rolling on. They may have a point. James Comey? Michael Avenatti? Stormy Daniels? Mention their names, some will shrug. Pressed with some reminders and more will say, ‘oh, yeah…’

Mention the name Robert Mueller, some will inquire, ‘who?’ But earlier this year, anti-Trump proponents thought that the special counsel would be the president’s downfall. Obviously not.

With 401k’s and incomes rising, those play in the 45th president’s favor. 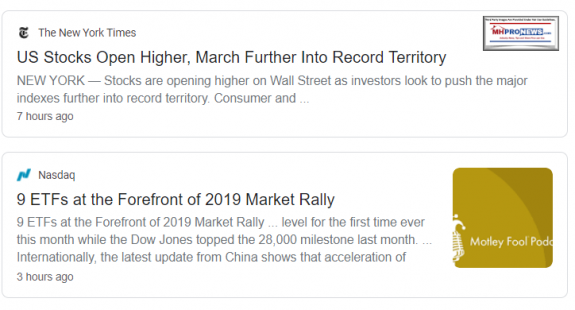 When Senator Elizabeth Warren (MA-D) attacked Mayor Pete Buttigieg (South Bend, IN-D) over fundraising with billionaires in a wine cave, it turned out that she’s had some 30 billionaire donors in 2018. Oops.

What might prove useful to either major party? We’d say – common sense.

The general election could well turn on relatively small numbers of voters in a few key swing states. There are 22 million Americans who are either living in mobile or manufactured homes. They are some 6 percent of the population. They went marginally to candidate Trump in 2016, per the New York Times. Did that help make a difference?

The Washington Examiner observed on November 10, 2016 that the “Election Came Down to 77,744 Votes” in Pennsylvania, Wisconsin, and Michigan. Some 77,744 votes out of than 136 million ballots cast.

The National Association of Realtors (NAR) has repeatedly done surveys of what percentage of renters want to become homeowners. It is routinely around 75 percent (+/-). The Apartment List said in early 2019 that there are 111 million renters. Do the math. Give those millions a path to homeownership that is sustainable, and numbers will bite.

Manufactured housing has been arguably been weaponized by the likes of organizations and billionaires like Warren Buffett, Berkshire Hathaway, and other often billion-dollar operations that are members of the Manufactured Housing Institute (MHI). MHI has postured support for those good laws that could turn millions into homeowners. But the trade group has purportedly been working with a favored few operations to consolidate the industry by thwarting those good laws.

Rephrased, MHI picks winners and losers among smaller to mid-sized businesses, which in turn harms millions of real Americans of all racial, religious and other backgrounds.

Show voters how the system is rigged and how a combination of existing antitrust laws and applying good laws that are already on the books can make their lives better, and don’t be surprised if more than enough respond to win an election.

Millions across the left-right divide are tired of cronyism and a rigged system. Millions are okay with wealth honestly earned but are not okay with actual or de facto corruption.

There are several states that could tilt the election either way. 100,000 votes or less could make the difference on November 3, 2020. Who will do the most robust and practical outreach to those large and forgotten groups?

There are laws that already exist that if public officials are pressed could bring much of the corruption to heel. Combine “enforce the law” with the political and business solutions and ethical smaller business, millions of current and potential consumers, and investors could all find surprising alliances with politicos that push for the same things.

To learn more see the related reports linked above and below the byline and notices. “Industry News, Tips, and Views Pros Can Use,” © where “We Provide, You Decide.” © (News, fact-checks, analysis, and commentary. See more below the byline, notices and sign up for our free x2 weekly emailed headline updates.) ## See Related Reports, further below. Text/image boxes often are hot-linked to other reports that can be access by clicking on them. Third-party images and content are provided under fair use guidelines.)