What will it take for manufactured housing, the principal source of unsubsidized, affordable homes in the United States, to reach its potential? 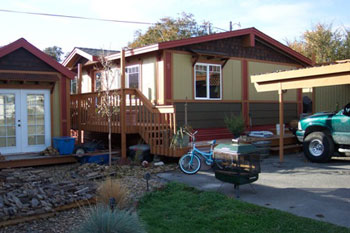 (MH) communities. The continuing consolidation of ownership is taking a toll, and the industry just can’t seem to shake the outdated, negative stereotype of a rusted, flimsy structure with a dog chained to the front porch.

Manufactured homes, frequently mischaracterized as mobile homes or trailers—even though once placed, they're rarely moved—house over 18 million Americans. Most are just getting by; the median annual household income of residents is $30,000. The homes are much less expensive to rent or own because they’re built in factories, so they cost less than half the estimated $94-per-square-foot national average for new site-built homes.

Not only is manufactured housing misunderstood, it’s underutilized. “We don’t have enough public housing to fulfill our needs,” says MH industry expert Lisa Tyler of Paris, Tennessee. “Manufactured housing presents a solution. It’s inexpensive, energy efficient, and a great value. There’s a lot of opportunity for growth in the industry, but a lot of obstacles, too.”

One such roadblock is the way most MH is legally classified as personal property rather than real estate, according to a recent report on manufactured housing from the Consumer Finance Protection Bureau. That means MH homebuyers pay higher loan rates, 6.79 percent on average, and have fewer consumer protections than owners of site-built homes, who paid 3.6 to 4.2 percent in 2012 for a conventional mortgage with a 30-year fixed rate.

And then there’s the persistent image problem. Industry insiders are dismayed that manufactured housing continues to be stigmatized, despite the fact that factory built homes constructed after 1976 must adhere to the U.S. Department of Housing and Urban Development (HUD) code that provides guidelines and oversight relating to quality, safety, and durability.

“Today, manufactured homes are often built with higher quality, more energy efficient and sustainable materials than site built homes, and many are set in lovely, tree-lined communities with responsible, hard-working residents," says Tyler. “The mainstream media tells us that people who live in manufactured homes are 'trailer trash,' drug dealers, or wife beaters. Sadly, many people still have trouble getting past that horribly unfair stereotype.”

Residents and owners of manufactured housing communities are also grappling with a wave of consolidation that began in the 1990’s, and continues unabated. Sun Communities Inc., for example, just announced it bought seven MH communities in the Orlando area for $257 million. So far, investors are mostly targeting larger communities, says L.A. “Tony” Kovach, publisher of leading trade publications MHProNews.com and MHLivingNews.com. “But we’re going to see things evolve over the next five years, as investors come knocking and begin targeting smaller sites, those with 150 units or less,” says Kovach, who's based in Lakeland, Florida.

These sites are traditionally the territory of small, local owners and operators, informally called Mom and Pop’s.

“The majority of parks were created by private owners, who manage this valuable resource for low and moderate income people who want a home of their own,” says Paul Bradley, the founding president of ROC USA, a nonprofit based in Concord, New Hampshire that promotes resident-owned communities (ROCs). “But they don’t get credit for it. These stewards of affordable home ownership are unsung heroes.” While smaller owner-operators have their flaws, “most of them are truly decent people who’ve managed their communities respectfully,” adds Bradley.

Meanwhile, many of these MH owner-operators are looking to retire, or get out of the business due to economic pressures and shifts in the industry. As fewer of their adult children want to take over the family business, more Mom and Pop’s are selling to larger operations, which, in turn, sell to investors. That’s when the fortunes of residents can change quickly.

“The difference between how a consolidator runs a business and how we did is one of values, frankly,” says Marc S. Seigle, a retired attorney and former owner, along with his family, of a MH community in Elbridge, NY. Seigle says they raised rents on tenants from $190 to about $300 over 25 years—just enough to cover inflation, taxes and insurance costs.

“There’s always a great deal of talk about the importance of quality affordable housing, but it’s pretty much eyewash—just talk,” says Seigle. “I saw an article in The New York Timesabout Wall Street investors making their fortunes in this industry. I thought, they suddenly discovered they could do what the rest of the world does with folks who don’t have much clout—gouge them. I’m saddened but not surprised to see it.”

Owner-operators of MH communities who're ready to exit the industry don’t have to sell to consolidators. There’s a better option, says Bradley. Residents can collectively buy the land, and create a ROC. Bradley’s organization, ROC USA, has helped secure community ownership for over 150 resident corporations to preserve and improve affordable communities, and help residents build their individual assets. Impressively, none of ROC USA’s communities have gone bankrupt, into foreclosure, or been resold.

Seigle’s family was the first to partner with ROC-USA, back in 2008. He says they received their asking price, and there was no downside to the deal. “I spoke with a consolidator, and it was quite clear to me they’d jack up the rents if we sold to them,” says Seigle. “The fact I was able to sell to my former customers, so they would have some control and I knew it would be well maintained—made it even a sweeter deal.”

Former MH community owner George Everett was also pleased with his ROC USA transaction. He sold the 32-unit Green Acres Cooperative, tucked deep inside the Rocky Mountains in Kalispell, Montana, to the nonprofit in 2010. “I know many of those who live in the community real well. Ninety-five percent are good, hardworking people who didn’t deserve for a developer to come in and suddenly raise the rent so high they’d have to leave their home.”

“I’m a conservative person, but I’d do it again,” says Everett, a former realtor, and a Republican who served in the Montana legislature for eight years. “I still drive past there and talk with the manager sometimes. It seemed to work out well for everyone.”

Dana Hawkins-Simons directs NHI's Opportunity Housing Initiative, a project that supports the expansion of long-term affordable housing programs and policies. She is an award-winning journalist and former senior editor of U.S. News & World Report. Reprinted on request, as first published in Rooflines,

(Photo of the Green Acres Cooperative by Lorie Cahill.)