1) Who, What and Where: (Your name, formal title at the MHI and where you are based).

I attended Eastern Kentucky University where I got a Bachelor’s in political science. After EKU, I attended Chase College of Law, which is on the campus of Northern Kentucky University. Out of law school, I intended to be a trial lawyer, but quickly found out I hated courtroom work. So, I drifted into bank work, representing a small community bank. When my friend Jim Bunning was elected to Congress in 1986, he was going to be on the House Banking Committee. He asked me to join his staff, so my wife and I packed up to move to Washington – me working for Bunning and Linda went to work for Congressman Connie Mack from Florida.

When we started having kids, we decided to move closer to family, so I joined a law firm back home and jumped back into banking work.

Twenty-one years later the kids are all grown and I’m back in DC with MHI.

3) When and How: (When and how you began in manufactured housing. Also mention your professional interests in other fields, such as writing novels.).

But back in the 80’s, Congressman Bunning’s first sub-committee assignment was Housing. Back then, energy standards was the hot topic of the day for the industry. And I remember getting my first education about the industry during those discussions.

Since assisting Jim on that subcommittee, affordable housing has remained a passion of mine. I served on several community task forces in my hometown on the issue.

4) What are your personal interests or hobbies? How do you like to spend non-work time?

Outside of the office, I spend a lot of time writing. When most folks go home and turn on the television, I turn on a lap top.

I’ve written four political thrillers and one coming-of-age novel. My collection of political humor columns is a former #1 on Amazon. And I co-authored the life story of Landau Eugene Murphy Jr. – the guy who won Season Six of America’s Got Talent.

Before you think it’s all work and no play, I should point out that on weekends it’s a hard choice between writing, golfing and fishing.

5) Manufactured Housing Institute (MHI) President Richard “Dick” Jennison said, “Rick brings to MHI the practical legal experience we need right now. His banking expertise coupled with his government background make him the perfect fit for MHI.” Let us welcome you on board to the industry and its Arlington VA based national association. Tell us about your experiences in the banking and finance sectors, please.

When I was at the Graydon Head law firm, my focus was in finance. I represented both lenders and borrowers in commercial lending transactions. It was a good mix because it allowed me to see transactions from both sides of the table.

I also watched first-hand as the credit markets started to tighten up. I understand how over-regulation has squeezed the availability of credit. 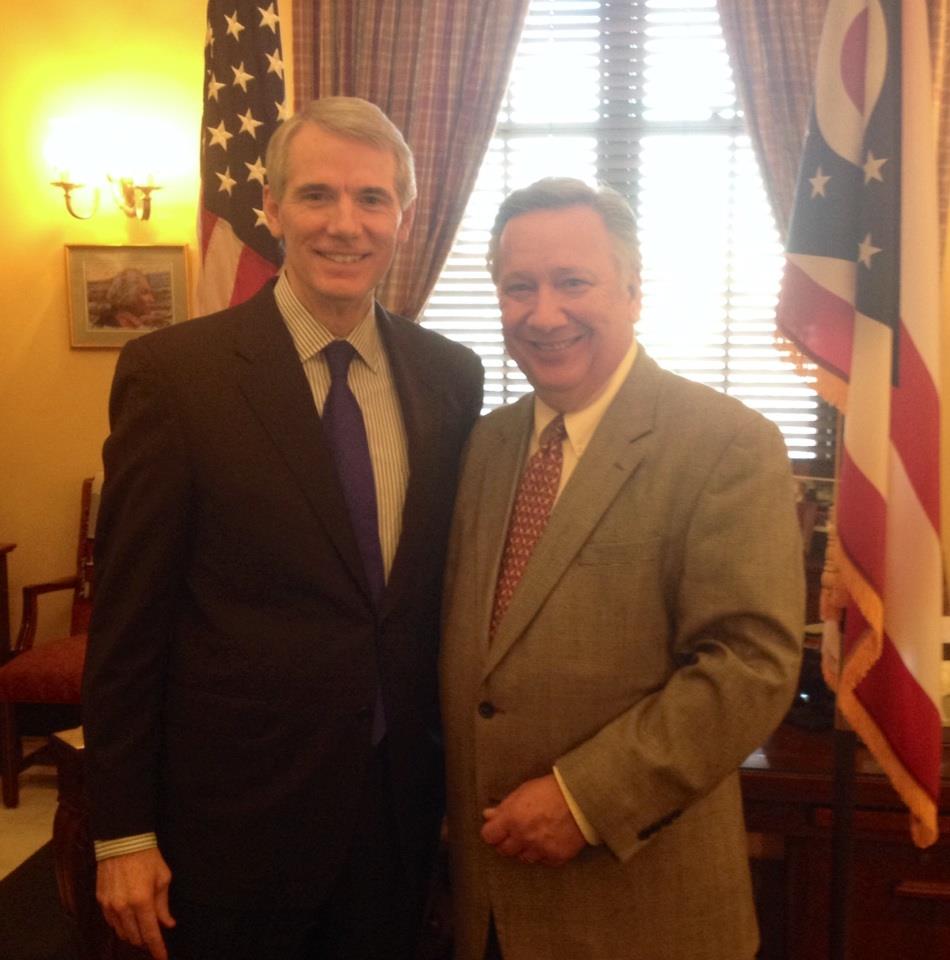 6) Cincinnati Enquirer, a Gannett publication, did a favorable write up on you in December. It mentions your being the legislative director for former Congressman Jim Bunning.

Along with the finance work, I did a bit of lobbying for Gannett and occasionally some First Amendment work for their newspapers, as well. It’s good when former clients write nice things about you.

The time with Bunning was great. I am a huge baseball fan and it was always fun to see who would drop in the office to say Hello. Hank Aaron came by once and I sat as he and Bunning relived seemingly every pitch of every game they had played against each other.

One day I went to the White House with the Boss where I sat in the Rose Garden with Jim, Ted Williams, Joe DiMaggio and President Bush (41). That’s not a bad day for kid from a small town in Kentucky.

7) As we noted previously, you have significant experience in lobbying. In fact, you’ve already made a number of trips to DC. For those who don’t do a lot of lobbying, give us a snapshot of how that process works in practice.

Lobbying is all about building relationships and providing education. I always like to spend a bit of time getting to know the staffer before I jump into industry issues.

The other day, I visited a young man who was a huge Bo Jackson fan. On another trip, I discovered that a young woman from the northwest happened to go to school close to my hometown. Washington remains America’s biggest “little town.” I constantly run into people I worked with two decades ago.

8) You have a new novel, Writ of Mandamus. It is the latest in your legal thrillers, correct? How many books have you had published? How do you balance writing with your legal career? Please pull back the veil for a peek at your writing career.

Writ of Mandamus has done very well. In fact, it won the London Book Festival. But writing is a release for me, just like reeling in a rainbow trout. If I have a frustrating day, I can turn on the lap top at night and get lost in the world of my characters.

It’s also a great intro to elected officials, many of whom have dreams of getting something published when they leave office. I once had the Speaker of a state general assembly buy me lunch to ask for an introduction to my publisher.

9) Your Richard Thompson series of political novels will have the fifth installment published next year, right? Is it fair to say you are a “political junkie?” Does the news of the day sometimes inspire or suggest ideas for writing?

I can’t help myself, I am a junkie. I carry a small notebook around in my pocket to write down ideas. Most of the time I’m just capturing certain observations.

The other day I was headed down to the Hill and a man was preachin’ the Gospel on the Metro. I wrote it down. I have an idea he may show up in the next book.

10) Our sources tell us that you will be based in KY, but will tele-commute to DC and make numerous trips around the country in 2014. Give us a preview of what state and community associations might expect if you come to their meetings and events?

I’m not sure of my 2014 schedule yet. I started at MHI in mid-November and hit the ground running. In fact, I met with Sen. Al Franken the Friday before I officially started. I spent all of my time last year in DC, making nearly three dozen trips to the Hill between the Thanksgiving and Christmas break educating Senate and House staffers on our industry and issues.

But part of what drew me to the job was Dick Jennison’s vision of developing state association outreach. While I’m still learning the intricacies of the industry, we’re hoping to develop a couple of programs that MHI would make available for state meetings.

Additionally, I’ll be available to take part on panel discussions for government affairs, politics and compliance topics. That state outreach will end up determining how much time I spend in DC in 2014.

11) You have plans to attend the Louisville Show. I recall when Dick Jennison went to the Tunica Show in 2012. Trade shows are a great way to see the industry’s homes up close and to encounter hundreds of people, especially like at events such as the KMHI-MHI Mixer at Louisville. You will be there for that function, right? With somewhere between 2400-3000 pros coming to Louisville in 2014, what thoughts go through your mind? What are the things you want to do personally while you are at the event?

I’m really looking forward to Louisville, especially since it is right in my backyard.

I’ll be at all the events and would love to meet folks. I’ve spoken with a lot of the MHI Board members on the phone, but this will be my first chance to meet many of them in person.

Additionally, I’m really looking forward to meeting the executive directors of the five state associations putting on the show to hear what they would like to see from our 2014 outreach programs.

This will be my first event for MHI, so I’ll be easy to pick out. I’ll be the guy with the deer-in-the-headlights look wandering around the show floor.

12) You’ve been part of a law firm for something like 2 decades. How does that and your other experiences prepare you for what lies ahead working for the Industry at large via the Manufactured Housing Institute?

In the law practice, just like government relations, you learn very quickly how to drink from a fire hose. Multiple issues often hit you at the same time and it becomes important to understand how to prioritize and then deal with all of them accordingly.

13) Tell us about your biggest failure and biggest success in legal work. What did each experience teach you?

My biggest success was documenting and closing a large financing for a horse race track and getting it done in under a week. They had fired another counsel, but the deal still had a “set in stone” drop-dead date for closing. Not only did I get it done in a week, but I got it done under budget. Knowing the client’s priorities and time restraints were key.

But early in my legal career, I pitched a new client for work. It was a big company with a lot of work. I pitched when I should have listened and the work went to another firm. I learned a valuable lesson from both situations about listening taking priority over speaking.

14) Dodd-Frank, SAFE Act, GSE Reform and a host of other issues face manufactured housing. UMH President Sam Landy suggested in an interview with us that our industry might reach 5 or 6 times its current size, if regulatory hurdles could be navigated. Problem solving is part of the essence of the legal profession. How do you go about considering your options in taking on – or avoiding – potential legal challenges? What would you say to cause those who have not yet contacted their congressman to support HR 1779? What should they say to their Senators when the companion bill is filed?

The best contact for any Member of the House and Senate remains the folks from back home. I can make trips to the Hill all day long, but most of the time it’s a call from the constituent back home that gets the staff and Member’s attention.

I always tell staff about the industry’s presence in their state, but it’s the contact from back home that actually gets them on a bill.

Recently Dave Hess of Audere Ventures happened to sit next to Congressman Patrick McHenry on an airplane flight to North Carolina and pitched him on HR 1779. I met with the Congressman’s staffer a couple of days later. Even though I knew the staffer from the days he had spent in Bunning’s Senate office, it was the conversation between Dave and Congressman McHenry that got him as a cosponsor on the bill.

Nothing other than I’m really excited about the challenge of representing the industry in Washington and beyond.