One of the take aways from off-the-radar discussions in Vegas was this. The GSEs – Government Sponsored Enterprises of Fannie Mae and Freddie Mac – are being as polite as they can to our industry, but they have have clearly said they have no intention to offer chattel lending on manufactured housing. Support for lending on MHCs?  Sure, no brainer for them and MHC operators. But sources tell the Masthead, anything one hears or reads to the contrary about DTS for chattel is wishful thinking, or spin, etc.

We believe there can be value in cheerleading for a worthy cause.. We also believe in mutual victories, no one who works with manufactured housing ought to do so thinking they are about to enter into a losing proposition, or another blood bath such as occured for lenders in the late 1990s and early 2000s on MH chattel loan paper.

That nearly 2 decades old experience is what has caused the fears and concerns the GSEs want very much to avoid. We’ve long supported DTS, periodically brought the issue up, when others failed to do so. We believe this ought to be embraced by the GSEs, and the FHFA ought to make this happen. So what more needs to be said about this issue?  Some elements of the dicussion ought to include, but not necessarily be limited to, the following:

1) Is the law, the law? Is HERA 2008 which mandated DTS applicable to the GSEs on chattel lending?  Can you or I ignore a law that we don’t want applied to us?

2) Should there be an effort to “win over” the GSEs?  To ally their fears? Show them how personal property loans on MH can profitably work for everyone’s benefit?

3) Do the GSEs not see that if chattel lending works for four proven MH lenders who make loans in most states, then why should they fear it?

4) Our sources tell us the ONLY way that DTS on home-only loans is likely to happen short term is for the FHFA to order that DTS on chattel lending takes place.

5) Given #4 above, what happened behind close doors in meetings with MHI, consumer groups and the FHFA? What happened to transparency? What happened to those media reports last fall suggesting chattel financing with DTS was an all but a done deal? Did something go sideways, and if so, what was that something(s)?

6) When affordable housing is a growing crisis that manufactured housing can uniquely address, and with federal and state budgets so strained, as good corporate citizens, don’t the GSEs have a moral duty beyond the legal one to support MH with a sustainable lending program?

7) It will likely take a major effort to get a DTS program that provides chattel lending from the GSEs. That’s the word heard by MHProNews in Vegas, from sources in DC and elsewhere.

Let’s be clear.  While DTS could be helpful, and we support at MHProNews continue to support it, there has to be parallel paths that develop and increase our MH industry’s production.  We’re growing in new MH shipments, but not nearly at the pace we are capable of, and not at pace the nation needs to keep up with the growing demand for quality, affordable housing.

We could grow faster with DTS, but there are solutions available right now that makes advancing a profitable, positive thing to pursue.

Keep that DTS fire burning, but don’t sink all your eggs into that one basket. ## 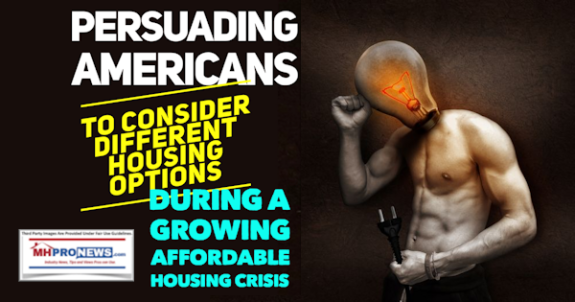