There is a principle useful in understanding the true impact of a government intervention. It’s summed up in this simple phrase.

“Whatever you subsidize, you tend to get more of it.”

Those examples are obvious, and are the reason something gets subsidized in the first place. Where this principle gets ‘politically charged’ is in the following examples.

When government is subsidizing housing? You create more demand for subsidized housing.

When government is subsidizing poverty? You can artificially create incentives that yield more poverty.

For a government agency, you need paid workers. Do those workers have a built-in motivation to truly get to the heart of an issue, and forever resolve the cause of a problem? If by some means, they accomplished that, wouldn’t they be putting themselves out of work?

So, given human nature, don’t they want to appear – and actually do – some good, while at the same time never curing the ill they are ostensibly created to address? Isn’t the appearance of effort and some good outcomes useful to the agency and those employed or who benefit?

In doing whatever the agency is tasked to do, isn’t there an impetus to maintain and grow the agency that writes their paychecks?

After all, “whatever you subsidize, you tend to get more of it.” That includes governmental agencies, ever expanding, needing more workers, more authority, more tax dollars…

Furthermore, faith-based groups often operate on a sizable amount of voluntary labor. Thus more donated dollars go toward the cause, vs. tax dollars actually going  towards a targeted issue. The ‘overhead’ of faith-based groups is lower. Faith-based groups are more motivated to solve an issue, vs. endlessly posturing about an ever growing need, as is common with a governmental bureau.

2 > The CFPB advertising for clients or complaints, so they can get more calls and cases, thus better justifying their existence;

there are clear examples of how governmental agencies have an innate motivation to de facto find or create problems, so they can appear to be addressing their mission. Doing so protects an agency’s existence – and the many jobs within it.

The first example 1> may also point to why HUD tends to bury the free market solution offered by manufactured homes, vs. pushing for ever more federal subsidies for housing programs. After all, solving urban, suburban and rural housing needs without federal tax dollars being spent would reduce the need for HUD.

Over time, allowing the free market use of manufactured homes to solve affordable housing needs would result in thousands of jobs – reducing poverty – and reduces federal subsidies unfairly going to competing housing options.

Creating an agency was the result of a perceived, identified need. That identified problem had taxpayer dollars allocated to addressing that issue. And that created a demand, which was caused by a form of a taxpayer supported subsidy.

As in the manufactured home example above, please note that the problem being addressed by government tends to cut off a free market solution to that same issue.

Do we have a problem with affordable housing in the U.S. today? Yes. One can easily argue that the issue is best solved via free market created – quality and affordable – manufactured homes.

Allowing the free market to work also creates a reward – which leads to job creation, and more prosperity.

The Dilemma of Big Brother

An element of hubris or shortsightedness involved in thinking that ‘big brother’ government can be the go-to cure is the belief that something caused by a lapse in the moral order could be fixed by humans on a strictly secular level.

Fixing a moral lapse requires divine help. Thus, there is an innate need to routinely turn to faith for the solution. The purer and deeper the faith, the better the solutions and work outcome will be. We note this going into Holy Week for some 2.2 billion Christians worldwide, and the time of Passover for millions of Jews.

The ancient Christians taught a principle, “Ora et Labora,” “Prayer and Work.” The Creator – perfectly knowing the principles cited herein – requires humans to participate in the effort of solving. In doing so, humans become co-creators, more like the Divine.

Because the ancient Chinese proverb is right.

Want less poverty and more prosperity?  Work to get and keep government as limited as possible, and allow more faith-based and free market solutions. 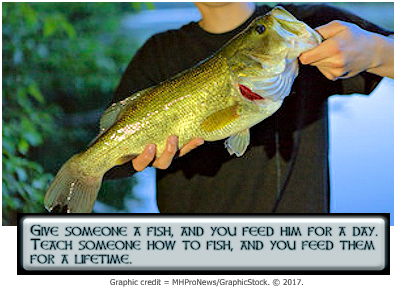 We’ll apply and return to this principle of “whatever you subsidize, you get more of it” and related from time-to-time. ##

By L. A. ‘Tony’ Kovach, publisher and industry consultant.