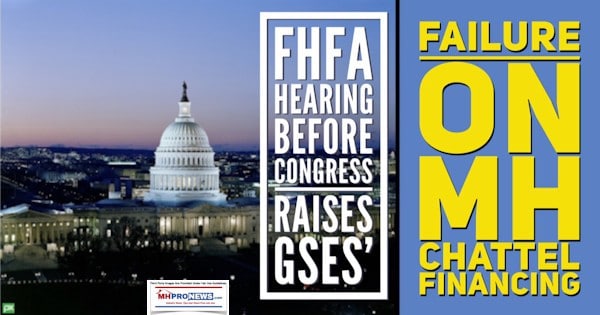 The Ford-Kavanaugh hearing wasn’t the only place in Washington, D.C. that charges of sexual misconduct were being publicly discussed yesterday.

As was noted by the Daily Business News on MHProNews, the Federal Housing Finance Agency (FHFA), featured a pile-on by members of both parties aimed at Mel Watt. But his time in office is short regardless, and thus the following is the more germane issue to manufactured housing industry professionals.

An extended quote from the release by the Manufactured Housing Association for Regulatory Reform (MHARR), which includes a download at the end of their statement to the Congress.

Washington, D.C., September 27, 2018 – The Manufactured Housing Association for Regulatory Reform (MHARR), in a submission (copy attached) to the House of Representatives’ Financial Services Committee in conjunction with a September 27, 2018 oversight hearing on regulation of the two “Government Sponsored Enterprises” (GSEs) – Fannie Mae and Freddie Mac – strongly criticized the Federal Housing Finance Agency (FHFA), for failing to implement federal law and, instead, sanctioning the GSEs’ continuing discrimination against lower and moderate-income American consumers seeking to purchase manufactured homes through personal property, or chattel loans.

Specifically, MHARR’s submission emphasizes that under the “Duty to Serve Underserved Markets” (DTS) provision of the Housing and Economic Recovery Act of 2008 (HERA), so-called DTS “implementation plans” developed by the GSEs and approved by FHFA in late 2017, fail to provide for market-significant participation by Fannie Mae and Freddie Mac in the manufactured housing chattel finance market some ten years after Congress, through DTS,  specifically directed the GSEs to “develop loan products and flexible underwriting guidelines to facilitate a secondary market for mortgages on manufactured homes for very low, low, and moderate-income families,” including chattel loans.  Such chattel loans account for 80% (or more) of the entire manufactured housing market, according to U.S. Census Bureau data.

As MHARR’s submission explains, the so-called Fannie Mae and Freddie Mac DTS “implementation plans,” by failing to provide for market-significant participation in the manufactured housing chattel financing market – beyond tiny, highly-conditional, “pilot programs” that through 2020 would serve, at most, little more than 1% of the manufactured housing market – do not and cannot, by definition, satisfy the express statutory mandate of DTS.  Indeed, it is utterly inconceivable that Congress, in adopting DTS, intended for the vast bulk of all manufactured housing purchasers — and potential purchasers — seeking to access the nation’s most affordable source of non-subsidized homeownership, to go unserved under DTS indefinitely and, potentially, forever.

MHARR, accordingly, will continue to press for the full implementation and application of DTS to manufactured home chattel loans and will continue to address, through all necessary means (including Congress and the Administration) the ongoing failure of FHFA, Fannie Mae and Freddie Mac to implement DTS in a timely and market-significant manner, thereby depriving lower and moderate-income Americans of the full access to affordable, non-subsidized manufactured homeownership that Congress sought to provide.

In Washington, D.C., MHARR President and CEO, Mark Weiss, stated: “Congress, in its vital oversight role concerninhg FHFA, must hold that agency – and, by extension, Fannie Mae and Freddie Mac, which are being and have been bailed-out with billions of taxpayer dollars — accountable for their ongoing discriminatory failure,more than a decade after-the-fact, to fully implement  DTS with respect to the 80% of the federally-regulated manufactured housing market that is represented by chattel purchase-money loans. Affordable homeownership is desperately needed in the United States and is at the core of the GSEs’ statutory mission.  Neither FHFA nor the GSEs should be allowed to flout this mission, nor the specific mandate of DTS with regard to manufactured housing chattel loans.”

The download of the testimony by MHARR to the Financial Services Committee is linked here. For more details, see the related reports, further below.   “We Provide, You Decide.” © ##