Vivek Wadhwa recently posted a column on LinkedIn with the provocative headline, Anyone, anywhere can start the next Google. Wadhwa is a “fellow” at the Arthur & Toni Rembe Rock Center for Corporate Governance at Stanford University.  Let's review some of his thoughts before commenting.

"A common excuse that entrepreneurs make for not being able to innovate is the lack of venture capital in their region. They argue that because investors are not ready to take a risk, they can’t succeed. Policy makers all over the world make the same excuse. So did legendary Indian entrepreneur Kiran Mazumdar-Shaw in a Linkedin post about “why India can’t produce a single Apple or a Google”."

"Access to venture capital may have been a problem as recently as a decade ago, but is no longer an inhibitor. The cost of developing world-changing startups has dropped dramatically. With the exponential advances in technologies such as computing, storage, and sensors, entrepreneurs can do what only governments and big research labs could do before: solve big problems."

"When Google was founded in 1998, for example, the DEC AlphaServer 8400, a minicomputer with the same processing power the iPad enjoys today, cost close to $1 million. Storage necessitated installing a server farm and rack upon rack of hard disks. It cost millions of dollars to start a technology company. Today, anyone can buy computing power and storage for practically nothing from companies such as Amazon and Google. The iPhone 5S is more powerful than the Cray supercomputers of yesteryear—which the U.S. placed tight export restrictions on. Today we carry supercomputers in our pockets and use them to check e-mail and make phone calls every now and then."

"It cost more than a billion dollars to sequence a full human genome a decade ago. It costs less than three thousand dollars to do now. Soon it will cost less than a cup of coffee. Genome data are available from millions of people already; soon this will be in the billions. Anyone anywhere can now write computer code that compares one person’s DNA with another; learn what diseases people with similar genes have had; and analyze the correspondences between genomes and the effectiveness with which different medications or other interventions have treated a given disease."

"The same advances are happening with sensor-based devices. Sensors such as those in our iPhones cost tens of thousands of dollars a few years ago but now cost practically nothing. They are allowing us to build devices to monitor our health—so that we can prevent disease and dramatically reduce health-care costs. Entrepreneurs are building iPhone apps that act like medical assistants and detect disease; smart pills that we swallow in order to monitor our internals; and body sensors that monitor heart, brain, and body activity. Sensors are also being used to monitor soil humidity, pressure in oil pipelines, and traffic patterns. These are available to Indian entrepreneurs as readily as to scientists in U.S. research labs."

"One device that I recently tested is by Alivecor. The prototype that Alivecor gave me worked with India’s $40 Aakash tablet. It provides the same information as expensive EKG machines do, and the data can be uploaded to the cloud and analyzed by software."

"An entrepreneur I know in Chile also built a water sanitization system that can help reduce the incidence of disease caused by waterborne viruses in the developing world as well as in the developed world. Alfredo Zolezzi’s $500 Plasma Water Sanitation System does what even the most expensive water sanitization systems don’t—kills 100% of the bacteria and viruses in water. This device can help save the millions of lives that are lost because of unsanitary water. It could also earn billions in revenue. Zolezzi built this with a small team in Chile—with no venture capital."

Wadhwa narrative of modern successes goes on, but you get the point.

Millions of professionals in all industries and careers – including tens of thousands in MH – are limiting themselves through their thoughts, words and actions. 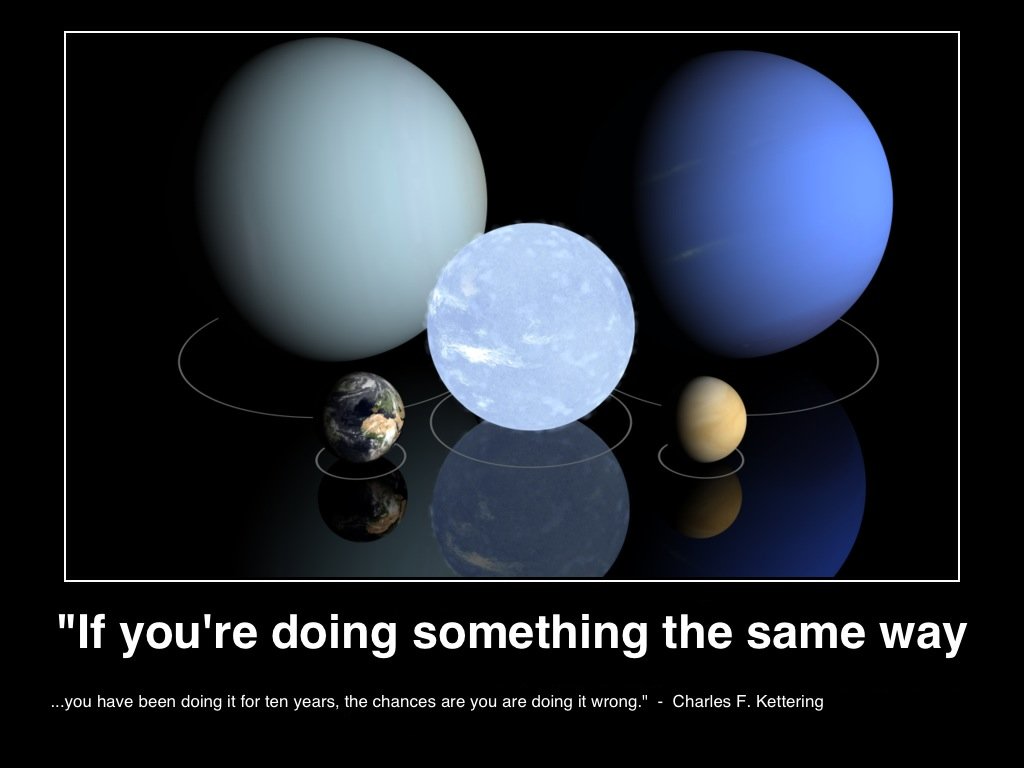 This is what Zig Ziglar famously and insightfully called 'cooked in a squat.'

Do you know someone doing the same things the same as they did 10 years ago?  Chances are good, they are limiting themselves when they do so! ##

PS: Check our many Exclusive and Red Hot Featured Articles for November and see the other new stories at MHLivingNews.com too.